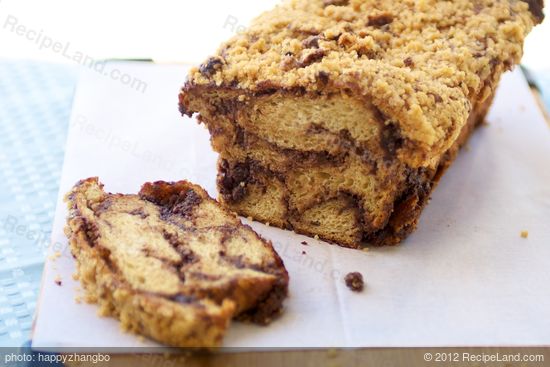 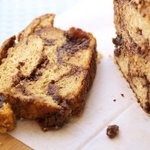 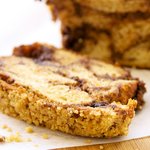 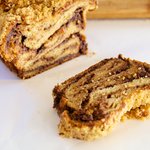 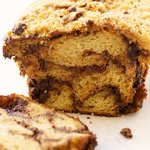 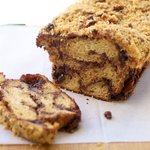 Found the original recipe in foodnetwork magazine "The Chocolate" issue. I changed a few things according to my own taste and this decadent chocolate babka only lasted about half day at our counter.

To make the dough

In a bowl, mix together yeast, milk and sugar, and let sit for about 10 minutes until foamy.

In a large bowl with an electric mixer, add sour cream, egg, egg yolk, butter, oil and applesauce, and mix until well combined.

Add the flours, salt and vanilla, and beat until combined, then beat on high speed for about 5 minutes until creamy.

At this stage, the dough is very sticky and wet.

Oil you hand, turn dough out, oil the bowl very well, then turn the dough back into the bowl, cover with a damp towel or a plastic wrap.

Let rise at a warm place until doubles in size, about 1½ hours, depending on the humidity and temperature.

Once the dough doubles, punch dough down with an oily hand.

Cover the bowl and put it in the freezer for about 2 hours.

When the dough is firm enough.

Dust generous amount of flour on a large piece of parchment paper.

Shape the firm dough into a square, then roll out the dough into an 11 by 15-inch rectangle.

Transfer the dough with parchment paper to a large rimmed baking sheet, and brush off the flour over the dough.

Cover and put the dough with the baking sheet into freezer, and let freeze for about 1 to 1½ hours until firm to roll.

While the dough is in the freezer, work on the filling.

In a food processor, ground the almonds and sugar until fine.

Process until the mixture is well combined and smooth.

Transfer into a bowl and cover with a plastic wrap.

Keep it in the refrigerator until ready to use.

In a bowl, mix together the sugar, flour, butter and oil with your finger to make the mixture clumpy.

Cover with a plastic wrap and put in the frige until ready to use.

When the dough is firmed up, take it out of the freezer.

Spread the almond-rum mixture evenly over the dough, leaving a 1-inch border.

Sprinkle the finely chopped chocolate over the almond mixture.

Time to roll up.

Start from a short side, roll up the dough tightly with the parchment paper.

Brush off the flour over the dough. Pinch the ends of the roll to seal.

Give the roll a few twists randomly.

Fold the twisted roll in half to let the two ends meet.

Keep twisting the folded roll a few times, which makes the rough look like a thick rope.

Place the final roll into the prepared pan.

Place in the not-turned on oven. Allow to double in volume again, 1 to 2 hours.

Brush the roll with the beaten egg. Sprinkle the topping evenly to cover the top.

Bake the babka until golden, brown and springs back when touched, about 1 hour.

Let cool in the pan on a wire rack for about 15 minutes.

Loosen the edges with a knife, and continue cooling in the pan until it cools completely.

Remove from the pan, slice and serve.

The slices can be kept in an air-tight container for a few days or freezer for up to 1 month.

Note: The babka is quite crumbly and fluffy, when you slice into it, it may fall apart a bit, which is normal.

Sounds healthy and exotic...divine! Thanks!

You are welcome, Bannie! The bread was healthier than the original recipe, but it tasted decadently delicious! Sometimes it doesn't have to packed with butter or cream, and it still tastes wonderful. 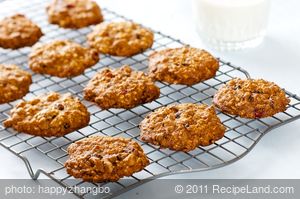 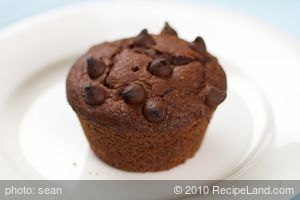 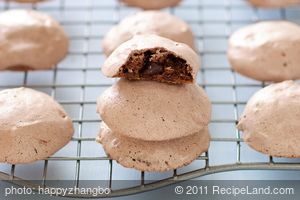