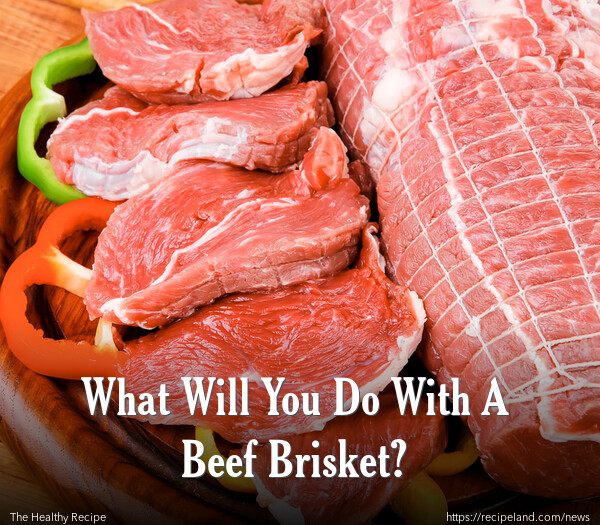 What is Beef Brisket?

Beef brisket is a boneless portion of meat taken from the breast area. While brisket is a less expensive cut of meat, it is also has a tougher texture. When prepared properly, beef brisket can be transformed into a velvety, tender, delectable meal.

Brisket is best suited for cooking methods that require a low temperature and a long cooking time, such as braising or smoking.

Many recipes for corned beef recommend rinsing the beef before cooking to remove some of the salt brine. Corned beef can be boiled, braised in a slow cooker, or baked in the oven.

How to Choose a Brisket:

When shopping for brisket, try to find one that has a bright red color and seems to be moist, but not dripping with juices. Buy at least 4 ounces of brisket per person you are shopping for. Corned beef brisket is usually clearly labelled and cannot be used interchangeably with unbrined cuts of brisket. Be sure to only buy corned beef it is called for in your recipe and do not pick up a corned beef brisket by mistake.

Getting Brisket Ready for Your Recipe:

No matter what cut of brisket you buy, it will have a layer of fat. If your recipe calls for this fat to be removed before cooking, ask your butcher to remove it or carefully use a sharp knife to trim it away at home.

If the brisket you purchase is too large for your crock pot, dutch oven, or roasting pan, divide it into two portions using a sharp knife. You could cook it in two separate pans or try to fit both pieces into one pan.

Some crock pot or dutch oven recipes will call for rolling the brisket and then putting it into the pan. Many brisket recipes recommend marinating the brisket overnight to make it more tender and flavorful.

Brisket is most often prepared by braising, or cooking at a low temperature in a small amount of liquid. You can braise your brisket in the oven, in a slow cooker, or in a dutch oven on top of the stove.

Choose the cooking vehicle that is best for you and suits your recipe. Using a crockpot will take the longest time. Cooking on the stovetop often requires searing the brisket. Creating a tender, finger-licking barbecue brisket is often done by baking at low temperatures in the oven.

Barbecued beef brisket can also be prepared in a smoker or on a grill. Both of these techniques require a lengthy cooking time at low temperatures. Smoking and grilling recipes for barbecued beef also usually recommend routinely basting or mopping the brisket with a sauce or beef juices.

Your fully cooked brisket will need to rest before you slice it. This gives the meat time to reabsorb its natural juices. Let your brisket sit for at least 10 minutes after the cooking time is complete. Then, move it to a cutting board. If necessary, trim off the visible fat. Slice the brisket into thin strips, cutting against the grain.

Follow your recipe instructions for when to add sauce or juices. Transfer your brisket to a serving platter and serve it with extra sauce or juices on the side, if desired.

Once your brisket has cooled, keep it in airtight containers in the fridge for 3 days or the freezer for 2 months. Freeze your brisket in individually-sized portions and it will be ready to thaw for a quick, weeknight meal.

Brisket of Beef with Sauerkraut and Dumplings