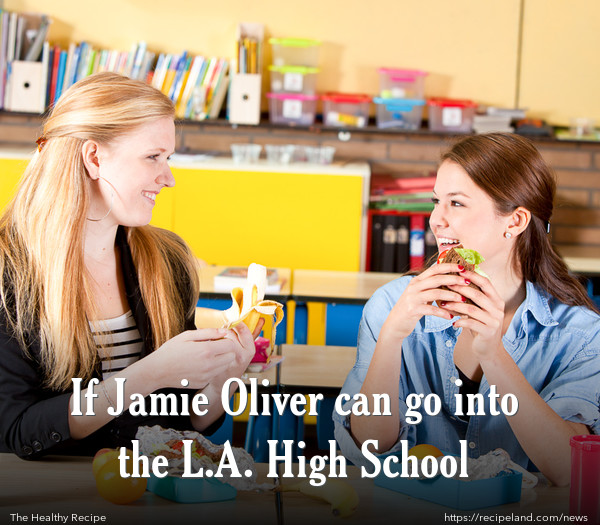 “Having Jamie Oliver work with our students and parents … underscores the MLA philosophy that our students' health and nutrition is critical to their success,” McGalliard said in a statement. “We hope that as Jamie continues to inspire all of us to focus on good food choices and healthy eating, that our partnership will be the first of many productive and successful dialogues he has throughout the district."

The chairwoman of the MLA schools’ board, Megan Chernin, said Tuesday in a piece on the Huffington Post that nearly half the children who live in the neighborhoods served by the schools are obese “or close to it.”

She said Oliver’s show “might actually have something important to contribute to the way we approach school nutrition.”

He hasn’t been happy that he hasn’t been allowed to go into its schools to film his reality television show by L.A. Unified, but he’s got lots of supports from parents and officials who’d like to work with him. And on Thursday he was planning to visit West Adams Prep, a high school near downtown.

Oliver’s production officials almost didn’t say anything but said he would meet with administrators and students. The British chef has been trying to get the permission to film the second season of “Jamie Oliver’s Food Revolution” in an L.A. school.

West Adams Prep, which opened in 2007, is one of two MLA Partner high schools (Manual Arts is the other) serving students in South Los Angeles. It has a partnership with Los Angeles Unified School District but makes some decisions independently. Its students eat LAUSD lunches.

That partnership made Oliver’s visit possible, said Mike McGalliard, the president and CEO of MLA, or Mentor L.A.

A spokesman for LAUSD said he didn’t know much about the Oliver visit. But Robert Alaniz said the chef had been spotted this week outside a Southgate school dressed as a tomato and handing out food and fliers to get people to lobby the district on his behalf.

Kevin
Australia
about 11 years ago

Congratulations to Mike McGalliard and Megan Chernin for having the courage and commitment to take on the LAUSD. It is amazing that the group that is there to protect our children seem to want to do everything in their power to stop it from happening

Jamie seems to be more about self-promotion than fighting for a healthier America.