Scrub the potatoes and pat dry.

Prick the skins several times with a fork.

Slice chestnuts with a very sharp knife approximately ¼ inch and place on a roasting pan.

Peel the chestnuts husks carefully away from the meat.

Combine meats with thyme sprigs and milk in a large saucepan.

Cut baked potatoes in half lengthwise.

Scrape out the inside of each potato, leaving approximately ¼ inch thickness around skin and reserve.

Mash hollowed potato and chestnuts gently with a masher until chunky smooth.

Fold in egg yolk and parsley and add salt and pepper to taste.

Place filled shells on an ungreased cookie sheet and fill with potato mixture.

In a deep bowl, marinate venison chop for 24 hours in a marinade of canola oil, allspice and aquavit or gin.

Place chops in pan and sear each side for approximately 5 minutes.

Sweat shallots and garlic in a 12-inch skillet with canola oil for approximately 10 minutes.

Add dry ingredients to pan and allow to caramelize.

Stir in berries and dried apricots and continue cooking over medium heat for 3 minutes.

Add orange juice and simmer for 15 to 20 minutes, stirring occasionally.

Remove pan from the heat and stir in mustard.

Chutney can be stored in a sealed container in the refrigerator for up to two weeks. 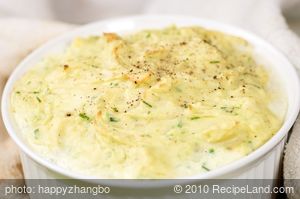 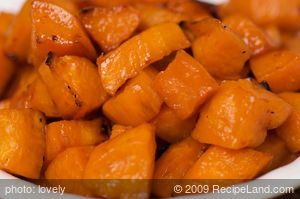 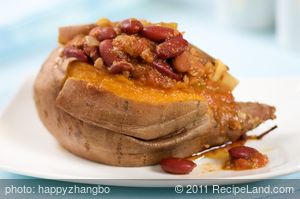