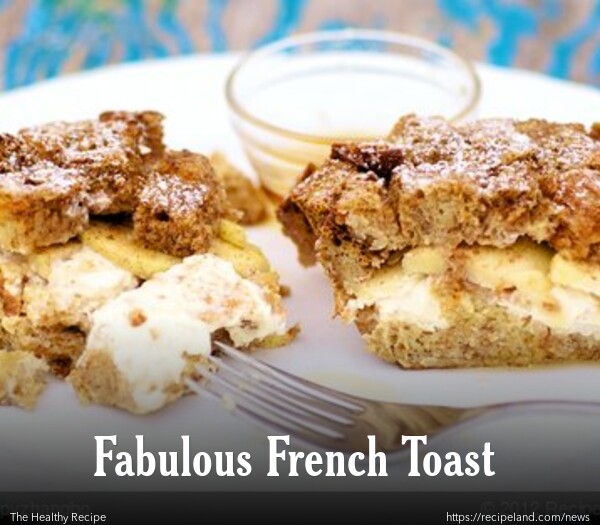 French toast is a Sunday breakfast and brunch staple in many homes and restaurants around the world. This dish of bread that has been coated with an eggy custard and then fried until golden is simple and easy to prepare.

Butter and powdered sugar, fresh fruit, or maple syrup are just a few of the toppings we love to slather on French toast. Recipes for French toast can be adapted to serve two for a romantic breakfast in bed or twenty for a family reunion brunch.

Transform French toast into a scrumptious dessert by topping it with a small scoop of vanilla ice cream and sprinkling on with a bit of cinnamon sugar,

It turns out that French toast is not really French. The earliest mention of this dish is in a collection of Latin recipes from the 4th century, describing bread that has been soaked in milk and cooked. During the Middle Ages, similar recipes were prepared in many countries throughout Europe. These recipes used bread that had become stale so that it would not be wasted.

Today, different regions of the world put their own unique spin on French toast. Hong Kong-style French toast features two pieces of bread stuffed with a sweet filling, dipped in egg, deep fried until crisp, and topped with butter and golden syrup. Similar deep fried and stuffed versions are prepared in Spain during the Easter season and Portugal at Christmas.

In many french speaking countries, French toast is called pain perdu. This version is made with stale French bread that has been dipped in an eggy custard seasoned with cinnamon and vanilla. The bread is then pan-fried in butter or oil, topped with powdered sugar, and served with jam on the side.

The perfect bread for classic, restaurant-style French toast is a ¾-1 inch thick slice of day-old challah or brioche. This yields a French toast that can stand up to the cooking process without becoming mushy or disintegrating. Bias cut slices of french baguette, sliced peasant bread, sliced ciabatta, or halved croissants also work well.

You want to use a bread that is sturdy, but has a slightly spongy texture so that it can absorb the delicious custard you will be soaking it in.

Choose a quick bread that is not too moist or crumbly with a compact, dense texture so that it will stand up to cooking. Let it become slightly stale before using it to make French toast. Yeasted bread with fruit and nuts is also delicious. Use English muffin bread or sourdough to give your French toast a sweet and tangy taste. Buttery pound cake or panettone can make a decadent dessert French toast.

Be creative and try what sounds good to you. Just be careful as you soak and fry non-traditional breads to keep them from falling apart.

If your bread of choice is a store bought, pre-sliced loaf of white or wheat bread, don’t worry. French toast success is still within your grasp; you just have to handle it carefully as the bread will be more delicate and easy to tear.

No matter what bread you choose, it needs to be stale. If you do not have any stale bread at home, you could lay out the bread you plan to use on a sheet tray and let it sit in a warm oven for a few minutes to dry it out. You don’t want to toast it. Let it cool to room temperature and then make your French toast.

Most local bakeries offer day-old bread on a sale rack. Bread in this area is usually stale and can be used to make French toast as soon as you get home.

Basic French toast custard is made with milk, eggs, and a pinch of salt. The best custard also includes cinnamon and vanilla! Some recipes add up to one tablespoon of sugar. Be careful not to add too much sugar or milk to your custard. This will make your French toast overly sweet and soggy.

As you assemble your custard ingredients, use what you have. Replace cinnamon with pumpkin pie spice or leave out the cinnamon and add grated orange peel and a splash of orange juice. Instead of milk, use half-and-half, cream, eggnog, or non-dairy milk. In a pinch, you could even use evaporated milk.

Prepare your French toast custard in a shallow dish that can accommodate the same amount of bread slices as the pan or griddle you are using to fry your French toast. A pie plate works well for two slices of bread. A 9x13 pan or casserole dish can be used for up to six slices of bread. Be sure to whisk your custard thoroughly until all of the egg is incorporated, so that there are no streaks of egg or egg white. These streaks will adhere to the bread and cook separately giving your French toast an inconsistent flavor and texture.

How long you let your stale bread soak up the custard depends on the texture and sturdiness of the bread. Allow classic French toast breads like challah, brioche, croissants, etc., to soak for a few minutes in the custard. Some recipes even call for soaking overnight.

If you are using a non-traditional bread like quick bread and pound cake or a pre-sliced store bought bread, dip it in the custard, flip it with a fork to dip the opposite side, and then move it to a hot buttered frying pan to cook. Just let it remain in the custard long enough to soak up the flavor without compromising its texture or falling apart.

French toast is traditionally topped with butter and maple syrup, fresh fruit with powdered sugar, jam, or golden syrup. However, you are only limited by your imagination!

Pour on vanilla creme anglaise or top with a dollop of whipped cream. Drizzle with honey and sprinkle cinnamon sugar on top. Spread with nut butter, fruit butter, chocolate hazelnut spread, or seasoned pumpkin puree. Make a fruit sauce or syrup from fresh fruit or by pureeing fruit pie filling in a blender. Sprinkle on chopped salted nuts or dried fruit.

For an interesting twist on French toast try these ideas:

French Toast For All

You can even make French toast suit most dietary restrictions. Use low-sugar or sugar-free toppings and leave the sugar out of the custard for diabetics. Select a hearty gluten-free bread that will stand up to soaking and frying for those with gluten intolerance. Add dairy-free milk to the custard and use dairy-free bread for those who cannot have dairy products. Top non-dairy french toast with a dollop of dairy-free spread or use peanut butter. For those who cannot tolerate eggs, replace each egg in your recipe with one tablespoon of cornstarch and use an egg-free bread.