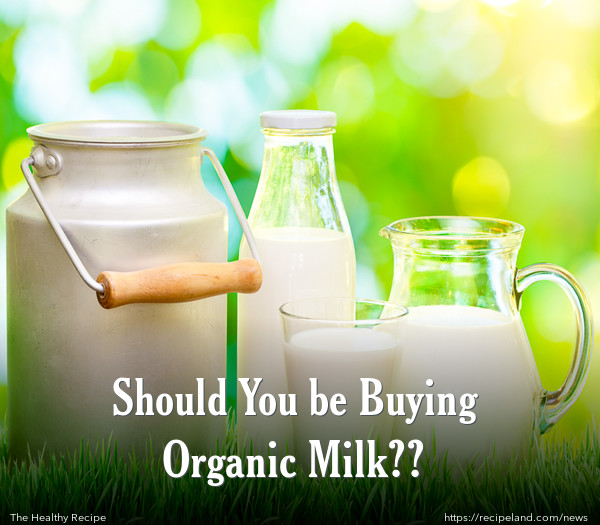 When you are at the store buying milk, you have a choice between buying an organic brand or a regular brand. If you are wondering whether there is a nutritional difference, a recent study might help you make the decision.

According to a recent study conducted at Washington State University, organic milk contains higher levels of healthy fats, such as omega-3 and omega-6 fatty acids than non-organic versions.

After examining the nutritional differences between organic and non-organic varieties of milk for 18 months, it was determined that the ratio of omega-6 to omega-3 fatty acids in organic milk is 2.3, while regular milk weighs in with a ratio of 5.8. A lower ratio is better for your heart health. Approximately 400 samples of milk were tested for this study, which was published in PLOS ONE journal.

Researchers think that the average person has a ratio of about 10-1 or 15-1 when it comes to omega-6 and omega-3 fatty acids, though a healthy range is considered to be more like 2.3 to 1.

According to Donald Davis, one of the researchers, there is significant confusion regarding the healthy levels of omega-6 that are required.

Because of this position, many Americans developed eating habits that resulted in consumption of far more fatty acids than they needed for healthy levels, leading to health problems. Omega-6 fatty acids are common in vegetable oils and processed foods.

The difference between organic and regular milk is significant when considering the ratio of fatty acids. Because organic milk comes from cows that are pasture fed instead of soy fed, they tend to produce milk with less fatty acids.

Should You Drink Whole Milk?

When researchers considered the health differences of organic and non-organic milk versions, they also evaluated the differences between whole milk and skim or low-fat versions.

Although the United States Department of Agriculture recommends low fat milk varieties, Davis and his researchers found that whole milk may be healthier.

Davis explains, “The evidence (that low-fat is better) is pretty weak, and there’s quite a bit of evidence that full-fat milk has beneficial properties too. Though the dietary guidelines for the U.S. for many years have recommended reduced fat, I think that will probably change some day.”

Researchers recommend that those who wish to change their ratio of fatty acids should consider switching to organic milk, and drink more milk in general. This can lead to a healthier ratio of omega-6 and omega-3 fatty acids in the body.