Melt about 2 oz of chocolate and the butter in a heavy saucepan, then let it cool.

Be careful not to let the chocolate burn.

Beat the eggs in a large bowl until they are blended.

Stir in chocolate-and-butter mixture. Mix until the chocolate is fully incorporated, with no streakiness.

Stir just until the flour is incorporated; over-stirring will make a tough brownie.

Spread the mixture in a greased pan, about 11 x 7 inches, that is about 1½ inches deep.

Cool in the pan on a rack.

While it is cooling, follow these instructions to make the first frosting: Mix about 1½ cups sugar, about ⅓ cup butter and about ½ cup of half-and-half in a heavy, medium-size saucepan.

Bring to a boil, then cook over moderate heat without stirring until a small amount of the mixture forms a soft ball when dropped in ice water, or it reaches 236 degrees F on a candy thermometer.

Remove from heat immediately and cool in a pan of ice-water until the candy is lukewarm.

DANGER: Melted sugar cools very slowly. You can burn yourself badly by testing it with your finger.

Add about 1 teaspoon vanilla extract to the candy.

Beat it until it is creamy and of a spreading consistency.

This is most easily done with an electric mixer, although you can use a heavy wire whip.

Spread the frosting over the brownies.

Melt the remaining 3 oz chocolate and spread over the frosting just put on the brownies.

Cover as evenly as possible. Cool for several hours in a refrigerator, then bring to room temperature and cut into pieces to serve.

Be very careful when melting chocolate. It burns easily. A double boiler is probably the best way thing to use.

It is critical to cook the first frosting to just the right point. If cooked too little, it will be too thin to beat to a creamy consistency.

If cooked too much, it will be too brittle.

So keep a close eye on it; sugar tends to cook slowly to the soft-ball stage, then it cooks quickly.

NOTES: * Very rich brownies with double frosting -- This recipe is for people who like intense chocolate flavor.

The result is a brownie with a fondant frosting, covered with unsweetened chocolate.

They are very rich, with an interesting combination of textures. 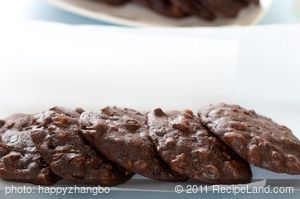 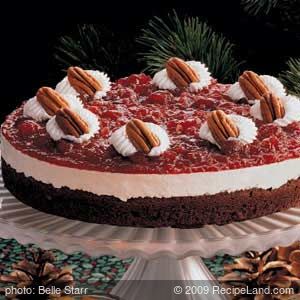 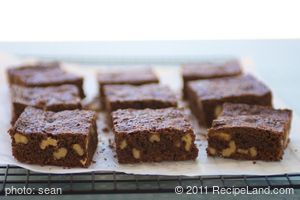