Pork or veal schnitzel with a mushroom sauce topped with bacon. Perfect for Oktoberfest or any time you are hankering for German fare.

I searched Google for Jagerschnitzel and found the top ranked recipes that were only reasonably acceptable. Many cooked the schnitzel improperly. Many used non-traditional ingredients, the sauce was thick and goopey instead of smooth and shiny and one recipe even used jarred gravy. Others result in a thick greasy coating. Yikes!

A good schnitzel should have a coating that puffs up and separates from the meat when consuming and not adhere like glue. The sauce should be gently flavored, not over seasoned, and somewhat thin compared to thick western style gravy.

Here's my version that when I tested reminded me of my last trip to Germany. 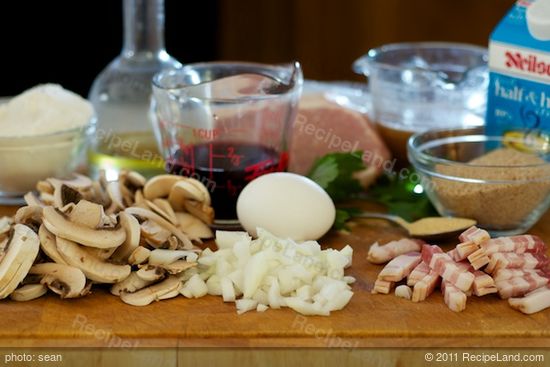 Pre-heat the oven to 300℉ (150℃) for keeping schnitzel warm whilst you prepare any accompanying sides.

Heat a skillet over medium heat and begin cooking the bacon until crispy. 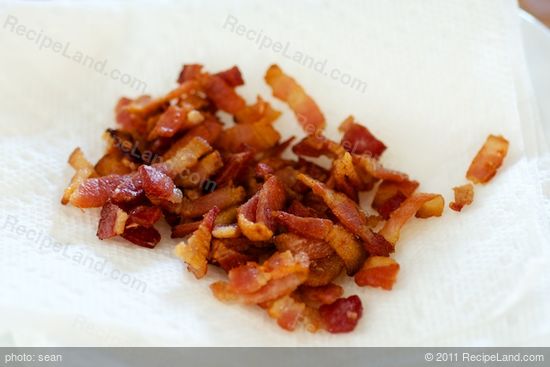 Meanwhile prepare the dredging for the schnitzel.

In a small bowl whisk together the flour, salt, garlic powder and black pepper. Distribute on a plate and set aside.

In the small bowl, whisk together the bread crumbs, salt, black pepper and garlic powder. Distribute on a plate.

One secret to a good snitchzel is to use fine bread crumbs. This helps allow the coating to puff up and away instead of becoming glued to the meat. If your bread crumbs are coarse then toss them into a food processor and whiz until they are fine. Not too fine though or you'll end up with flour.

In a shallow pie disk or pie plate whisk together the eggs along with a tablespoon of oil. Another secret to help create a crisp coating that won't adhere itself completely to the chop. Set this aside as well. 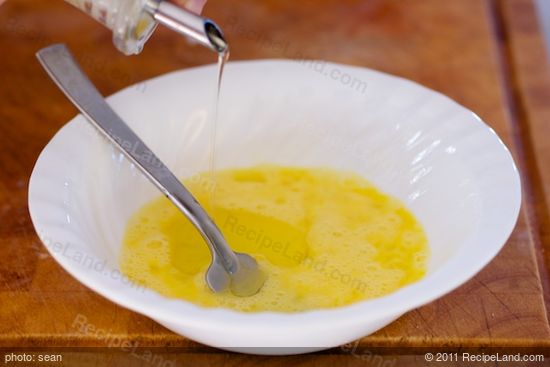 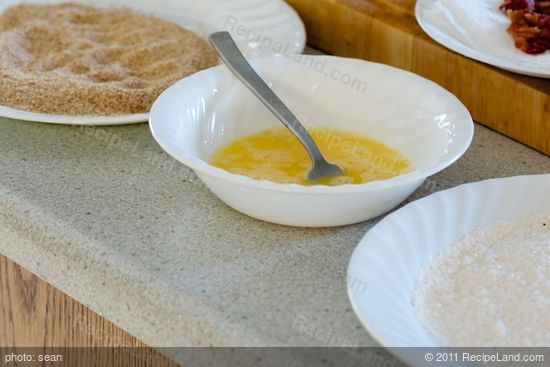 Your bacon should be ready. Remove to paper toweling to drain. Reserve two tablespoons of fat in the pan.

Add the onions and sauté until beginning to become translucent, about 5 minutes.

Add the sliced mushrooms and continue to saute.

Meanwhile, trim the pork chops of fat if desired.

Place each chop between two pieces of plastic wrap and pound with a meat mallet or even a heavy pot until they are an even ¼ of an inch (7mm) thick. Season with salt and pepper. 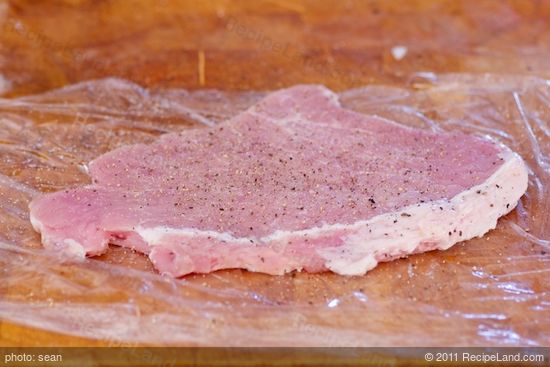 Your mushrooms should be ready for the next step.

Add two tablespoons of flour to the skillet and mix, cooking for 1 to 2 minutes to make a roux.

While stirring constantly add the red wine and the beef stock. Reduce heat to medium-low and stir frequently at a low simmer to reduce and thicken, about 5 minutes.

Dip each pork chop, thoroughly coating, first in the seasoned flour. Using tongs dip in the egg wash and then into the bread crumbs. Set on a wire rack. 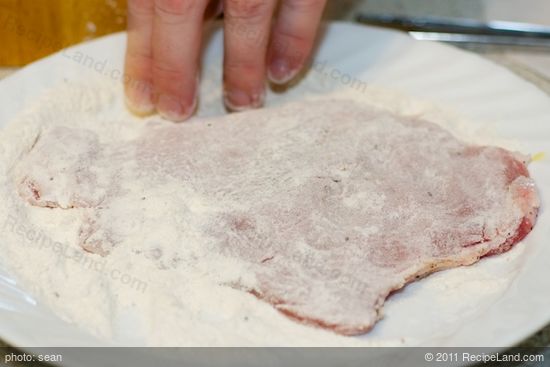 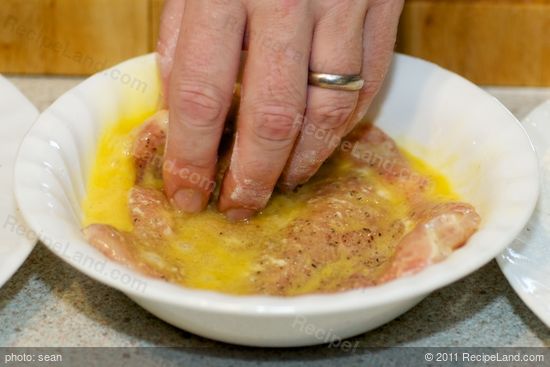 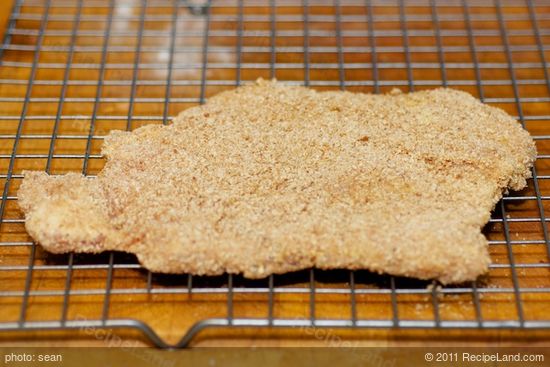 The secret to obtaining the best coating is to use an ample amount of oil for frying and ensure that it is well heated to very hot, just before smoking. The hot oil will help ensure that steam will prevent the coating from absorbing a lot of oil and becoming greasy.

Heat a cup of cooking oil in saucier pan (with high sides and big enough for frying) or a dutch oven.

Once the oil is hot carefully lay in each prepared schnitzel, cooking one at a time. Shake the pot and keep the schnitzel moving (mind the hot oil) about two minutes or until golden brown.

Turn the schnitzel over to brown the other side, about one minute. Remove, drain and place on a wire rack over a sheet pan in the warm oven to keep warm while you cook the rest of the schnitzels. 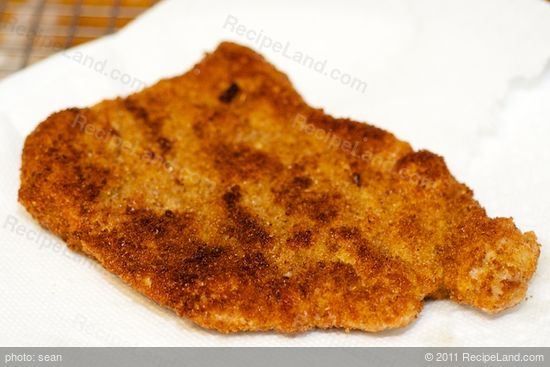 Add half and half (10%) cream to the sauce and combine. 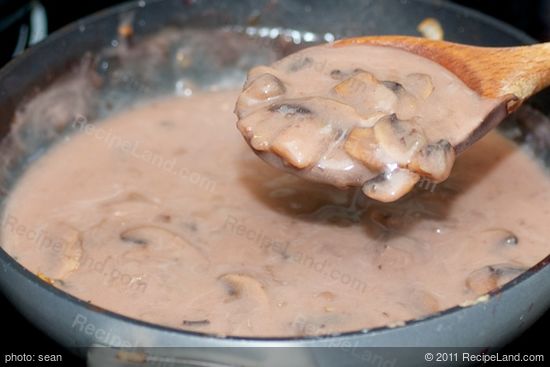 Remove the sauce from heat and add a small pat of butter to give it some added sheen if desired along with a grinding of fresh black pepper.

Place a schnitzel on each plate. Divide the mushroom sauce among the plates, spooning over each of the schnitzels.

Top with the crispy bacon and parsley for color. 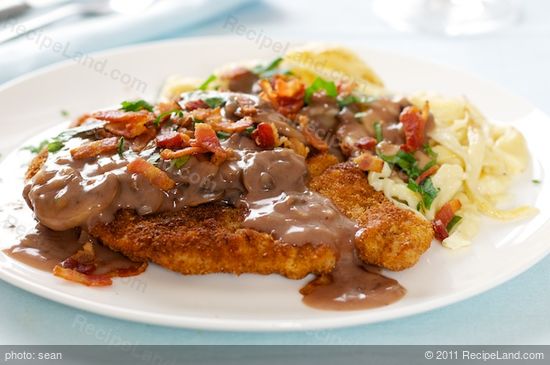 Serving with spatzel for an authentic touch or egg noodles work equally as well.

The recipe looks delicious and I will certainly try it. Getting the printed recipe was crazy, took 7 pages, really needed to be reduced to one or two. The instructions were a bit too wordy.

Have updated the print page to print the ingredients and directions in two columns side by side. If you use the print button (top menu bar) the recipe can now be printed on just two pages (or one double-sided).

Good basic recipe but would suggest less breading on top of flour, as it overpowers the taste of the meat. Have to add the word yuck by any cook, is a turn off for me. Yuck belongs in the school yard.

Good point about the work "Yuck", have edited the recipe and replaced it with "Yikes" so it doesn't have that schoolyard charm!

When printing recipes use the "Print" button just above the recipe for a printable version. Yes the directions are indeed detailed.

Another good looking recipie, has to be well worth a try. I wonder, for the benefit of we Europeons if you would be kind enough to add weights in gramms as well as cups please, it saves a lot messing with list/conversion etc.
Chees to all.

Followed the recipe and the sauce was uneatable.

The beef stock and red wine in your ingredients list are not used in your instructions, as far as I can tell.

Oops, nevermind...I spotted it...seems to be separated in both the instructions and the timetable for preparation, though.

great recipe but a pain in the butt to print. Great waste of ink.

Sorry to hear that you had trouble to print. How did you print? There is a print button, click on it and you'll get a printer friendly version. Hope this helps. Thanks for the comment, and happy cooking :)

I thought it was a good, tasty recipe. It makes a lot of sauce, so you can triple the pork loins without having to triple the sauce too. No extra salt needed.

Good recipe. I thought it needed a bit more acidity. Also... I feel the bacon is not needed. Having said that, nice recipe man. Thx for sharing.

Install Clean Print on your computer, a wonderful program for printing recipes and other documents.

I used to make those all the time. My family loved them. But it never was that complicated. I am from Germany.

Would imagine in Germany the technique for making schnitzel is second nature! :)

My mom is from Germany and she always seasons the meat with salt, pepper, paprika, onion powder and garlic powder as did her mother before her. She also never uses flour, just bread crumbs.

Great recipe! I've read others that called for mustard in the egg wash....and someone mentioned dill, which sounds great. Making it Thursday night, and can't wait!J

Cooking now will let you know

Really like the recipe, and the gravy is the best tasting one that I have tried. Thank you!

Thanks for letting us know that you enjoyed this dish very much. It is always our pleasure and passion to share delicious recipes with home cook just like you from all over the world. Happy Cooking :)

Have had these all my life and we also never used flour. For some reason all the chefs in America seem to use it. I find I prefer it to adhere to the meat and not puff away and some times fall off. Have tried both ways just for curiosity and like them better with just egg and bread crumbs.

I was a soldier in Germany when I first tasted Jager Schnitzel. It was love at first bite. When I get together with old Army buddies coming through my town, we always go to a great guesthouse in Stone Mountain, GA. This is a great recipe. The taste is fantastic.and my wife and I enjoy making it. It's fast, easy and delicious. I highly recommend making it.

Funny, my memory of Jägerschnitzel is not the Wiener Schnitzel type with puffy crust, but Naturschnitzel, which is just using flour for 'panieren' and then make the 'gravy' by adding water after you cook the Schnitzel. I flavor the sauce with maggi. Since I never like pork chops, I used pork tenderloin. It flattens easily with a meat tenderizer. I use white wine when cooking pork.

I am retired from the Army and lived in Deutscheland for six plus years. Needless to say this recipe is so sub par. I will never make it again.