A gherkin is not only a pickle of a certain size but also a particular species of cucumber: the West Indian or Burr Gherkin (Cucumis anguria), which produces a somewhat smaller fruit than the garden cucumber (Cucumis sativus).

Standard pickles are made from the Burr Gherkin, but the term gherkin has become loosely used as any small cucumber pickled in a vinegar brine, regardless of the variety of cucumber used.

Cornichons are tart French pickles made from gherkins pickled with vinegar and tarragon. They traditionally accompany pâtés.

Pickles, sweet is usually found in the canned goods section or aisle of the grocery store or supermarket.

There are 24 recipes that contain this ingredient. 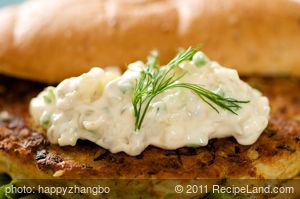