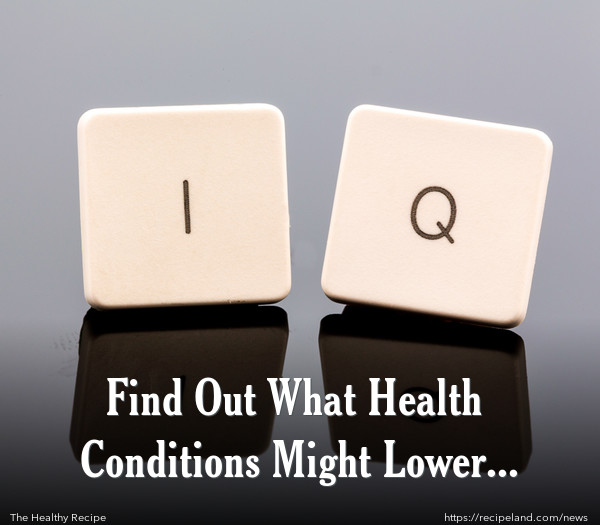 The mind-body connection is definitely strong, but there may even be a connection between intelligence and illness. Here are five things you should be watching for, to help keep your brain strong. New research has identified several health concerns that can actually affect your intelligence.

A recent study published in the journal PLoS One found that certain infections may adversely affect your intelligence. The infections that can cause problems are not necessarily things like the common cold or sinus infections, but instead the types of infections that may require hospitalization. Those patients who have been hospitalized 10 or more times showed cognitive decrease as compared with healthy people. Scientists think that there is a strong connection between our immune system and our brain, and inflammations and infections may cause brain damage when they are chronic problems.

While cancer itself may not affect your intelligence or your IQ, chemotherapy is known to have an effect. You may be familiar with the term “chemo brain,” which is a phrase commonly used by those battling the disease. Those patients on chemotherapy regimens demonstrate higher levels of memory loss, lower processing speeds, and overall decreased cognitive performance. The effects can reverse when chemo ends, but, in some cases the effects are long lasting or permanent.

When you do not get enough sleep, your brain function suffers. Researchers from the University of Pennsylvania studied chronic sleep loss in mice and concluded that there can be irreversible brain damage that occurs when there is not enough sleep. The areas of the brain most significantly affected are those that are critical for alertness and cognition. Scientists need to do more research, but they expect to find similar results in humans.

When you suffer a concussion, you are suffering at least temporary brain damage. Depending on the extent of the concussion, the damage can be permanent, and can affect intelligence and cognition. Researchers at Taipei Medical University in Taiwan found that women who sustained a mild concussion showed lower working memory abilities than a control group who did not experience any brain injury. Scientists think that women may be more susceptible to brain injury than men, and that the effects may take longer to subside.

Maintaining your intelligence is a good reason to make sure you are using proper bug repellent and checking carefully for ticks after being in wooded or grassy areas. Lyme Disease does not only cause muscle weakness and fatigue, but it can also cause decreased brain functioning. Leo Shea, Ph.D., president of the International Lyme and Associated Diseases Society, states, "There can be a decline in the processes of brain function—attention and concentration problems, memory problems, and the inability to deal with multitasking.”

Make sure that you protect your intelligence by avoiding these diseases and health problems, and making sure that you are properly treated if you do suffer from any of these conditions.