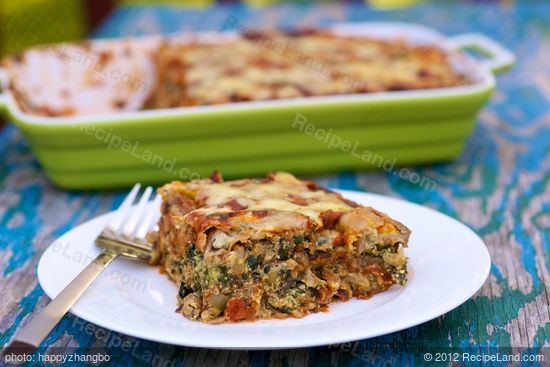 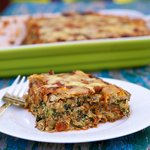 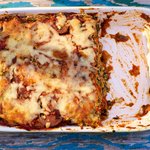 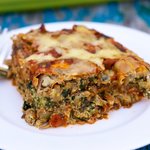 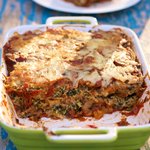 So far this is the best eggplant parmesan I have ever had. The mixture of ricotta, mozzarella and parmesan made the dish so cheesy and tasty...

In a large saucepan over medium-high heat, cook the green onion and mushrooms in a bit olive oil until very fragrant and mushrooms are partially browned, about 5 minutes.

Pour in the spaghetti sauce and the water, bring to a boil. Reduce the heat and let simmer about 25 minutes.

Meanwhile sprinkle the salt over sliced eggplant, set aside to drain about 15 minutes, then dry the surface with paper towels.

In a medium nonstick skillet, heat ½ tablespoon of olive oil over medium high heat until hot.

Add the garlic and onions, stirring often, and cook until the onions are browned, about 8 minutes.

Stir in the spinach, and cook until most of the water in the spinach has been evaporated, about 8 minutes. Season to taste with salt and black pepper. Remove from the heat and set aside.

In a shallow bowl, beat the egg and water together. Dip the eggplant slices in the egg mixture, then drag into the flour.

In a large non-stick skillet, heat a few drops of oil over medium heat.

Add the battered eggplant slices and cook until browned, turning once; drain on paper towel, 3 to 5 minutes on each side. Continue to cook until all the slices are cooked.

In a 13" x 9" casserole or similar capacity baking dish, spread about ½ cup sauce at the bottom.

Add a layer of eggplant, top with ½ cup cheese-spinach mixture, and another ½ cup sauce.

Repeat the same steps until all the ingredients are finished, spread the remaining sauce over.

Mix the remaining ¼ cup of mozzarella cheese and 2 tablespoons of parmesan. Sprinkle on top.

Bake uncovered about 40 minutes, or until the cheese melts and just starts to become brown. Remove from the oven and let stand for a few minutes. Serve hot. 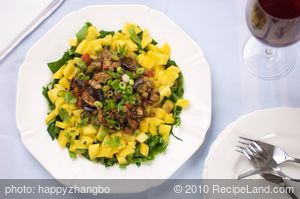 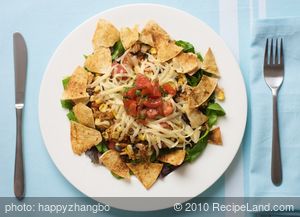 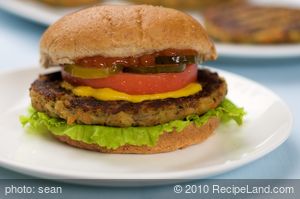