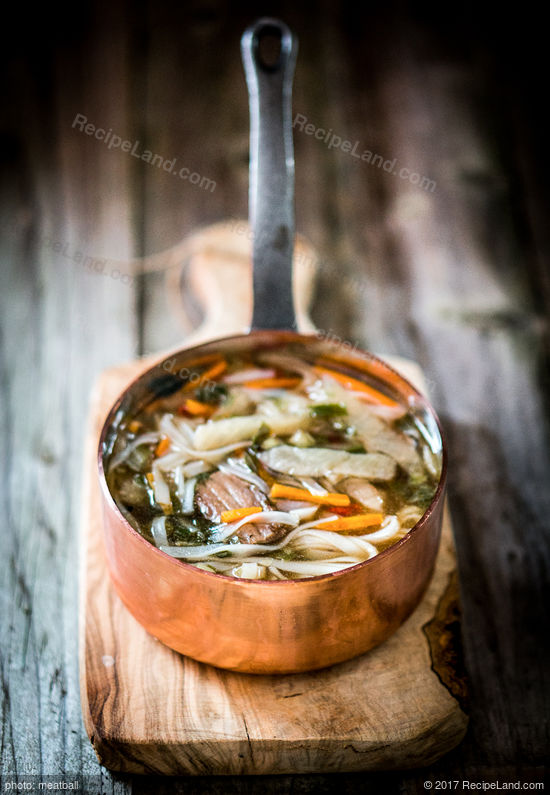 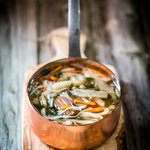 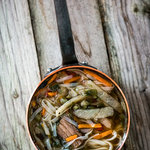 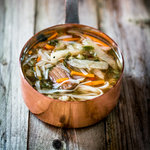 A savory and hearty soup made with succulent beef, hot chili sauce and bean sprouts.

In order to cut the beef into paper-thin slices, freeze the pieces of meat for 30 minutes before slicing.

The night before, clean the bones under cold running water and soak overnight in a pot with water to cover at room temperature. (This will help loosen the impurities inside the bones. When heat is applied, these impurities are released and come to the top much faster and can be removed, therefore, producing a clear broth.)

Place the beef bones, oxtails and short rib plate in a large stockpot. Add water to cover and bring to a boil. Cook for 10 minutes. Drain. Rinse the pot and the bones.

Return the bones to the pot and add 6 quarts of water. Bring to a boil. Skim the surface to remove the foam and fat. Stir the bones in the bottom of the pot from time to time to free the impurities. Continue skimming until the foam ceases to rise. Add 3 quarts more water and bring to a boil. Skim off all the residue that forms on the top. Turn the heat to low and simmer.

Meanwhile, char the clove-studded onions, shallots and ginger directly over a gas burner or under the broiler until they release their fragrant odors. Tie the charred vegetables, star anise and cinnamon stick in a double thickness of dampened cheesecloth. Add the spice bag, parsnips and salt to the simmering broth. Simmer for 1 hour.

Remove the short rib plates. Pull the meat away from the bones. Reserve the meat and return the bones to the pot. Simmer the broth, uncovered, for 4 to 5 hours. Keep an eye on it; as the liquid boils away, add enough fresh water to cover the bones.

Meanwhile, slice the beef sirloin against the grain into paper-thin slices, roughly 2 by 2 inches in size. Slice the reserved short rib meat paper-thin. Set aside.

Soak the rice sticks in warm water for 30 minutes. Drain and set aside. When the broth is ready, remove and discard all of the bones. Strain the broth through a strainer or colander lined with a double layer of dampened cheesecloth into a clean pot. Add the fish sauce and bring the broth to a boil. Reduce the heat and keep the broth at a bare simmer.

In another pot, bring 4 quarts of water to a boil. Drain the noodles, then drop them in the boiling water. Drain immediately. Divide the noodles among 4 large soup bowls. Top the noodles with the sliced meats. Bring the broth to a rolling boil. Laddle the broth directly over the meat in each bowl (the boiling broth will cook the raw beef instantly). Garnish with the scallion mixture and freshly ground black pepper.

Serve the onions in hot chili sauce and the accompaniments on the side. Each diner will add these ingredients as desired. 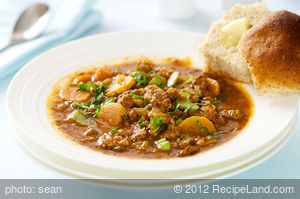 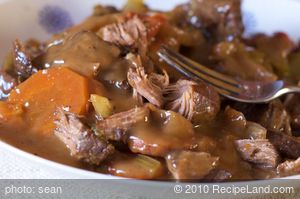 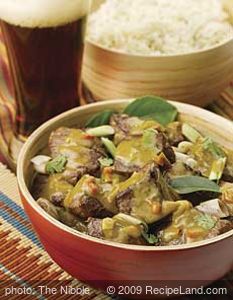