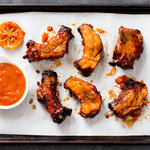 Near perfect pork ribs with a beautiful sweet, tangy and sticky exterior and fall off the bone meat.

Preparation time: ½ day, but constant attention is not required.

Simmer the sauce, stirring until the sugar is melted. Then, stir occasionally for a few minutes while the oil is drawn out of the lemon. Do not allow to scorch. Remove from heat and set aside.

Broil the ribs flesh side up until browned. Turn and cook flesh side down, brown again. (Even better is to use a barbecue to brown instead of your oven broiler for this step)

Now brush both sides with some of the sauce and cook on each side for five minutes.

Do not let them burn or blacken! The RIBS at this point look good, but they are still raw. Cut the ribs apart and dip each rib in the sauce.

Pile the ribs high on a full-sized oven broiler rack and pan, and pour any remaining sauce, less a cup or so, over the ribs.

Cover the ribs with heavy-duty aluminum foil, tucking in around the outside edge of the pan to make an airtight container.

Cook in the oven at 325F for 2 hours. Remove from oven and open very carefully.

Beware the live steam that will rush out. Allow to sit, opened for a few minutes.

The end result is smoked, steamed, tender meat which falls from the bones. All fat is rendered and drains into the pan.

Use leftover sauce when warming over the second day.

too many ads... on the side.. please unsubscribe....
Linda 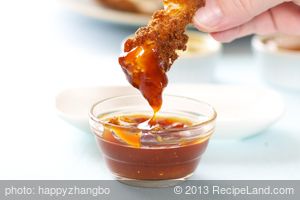 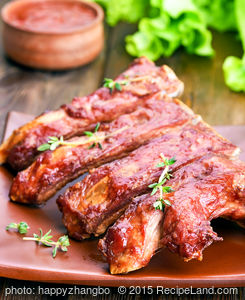