This Key Lime Pie was so much lighter, and the meringue topping was fluffy, creamy and super light. Enjoy this delicious key lime pie without feeling guilty!

Blend with your fingertips until thoroughly combined.

Press the mixture in an even layer on the bottom and sides of the pie plate.

Bake until lightly browned, about 10 minutes. Cool on a wire rack.

Stir water and gelatin in a small heatproof cup or bowl.

Microwave, uncovered, on High until the gelatin has completely dissolved but the liquid is not boiling, 20 to 30 seconds.

(Alternatively, bring ½ inch water to a gentle simmer in a small skillet. Set the bowl with the gelatin mixture in the simmering water until the gelatin has dissolved completely.)

Stir the gelatin mixture, then whisk into the lime mixture.

Set that bowl over a larger bowl of ice water, stirring occasionally, until it begins to thicken, 15 to 20 minutes.

Scrape the filling into the pie shell and refrigerate until chilled and set, at least 4 hours and up to 1 day.

For the meringue and pie: 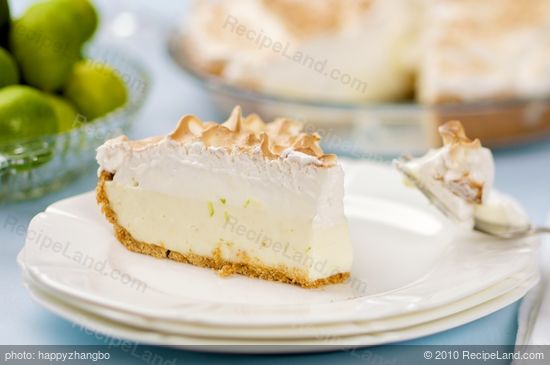 Position oven rack about 6 inches below the broiler; preheat broiler.

Beat reconstituted egg whites and cream of tartar in a mixing bowl with an electric mixer on medium until soft peaks form.

Gradually add sugar and continue mixing until the egg whites are glossy and hold stiff peaks. Blend in vanilla.

Spread the meringue over the top of the pie, sealing to the edge of the crust and decoratively swirling on top.

Broil (leaving the oven door ajar and watching very carefully to prevent burning) until the meringue is lightly browned on top, 30 seconds to 1 minute. 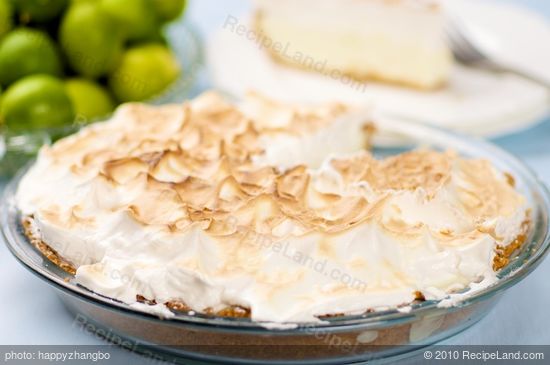 Thanks for your comment, just edited the recipe, and the egg white should be mixed with the other pie crust ingredients together. Hope you will enjoy this delicious and light key-lime pie :)