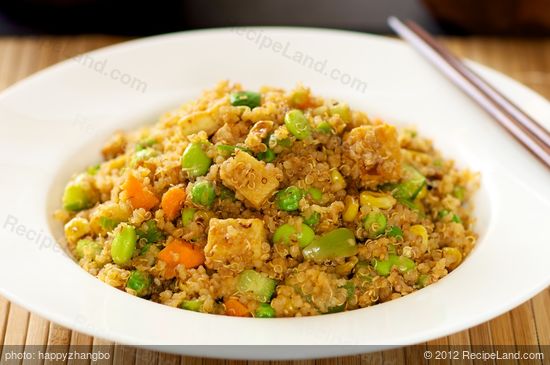 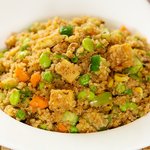 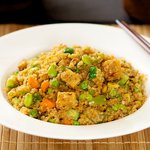 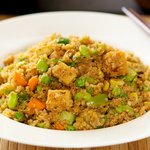 Soy sauce, sichuan hot chili oil, sesame oil, rice vinegar... These tangy Chinese seasonings make this quinoa and edamame salad taste absolutely flavorful, and it's a delicious salad that can be served as a side dish or a main dish; warm, at room temperature or chilled.

Bring a pot of water to a boil, cook the edamame for about 8 minutes, rinse under cold water, and shell the edamame. Transfer into a large mixing bowl.

Meanwhile toast quinoa in a medium nonstick skillet over medium heat until browned, stirring often, about 8 minutes. Transfer into the same mixing bowl.

Add toasted quinoa and water in a medium saucepan, and bring to a boil.

Reduce heat to low to maintain a gentle simmer, cover and cook until the water has been absorbed, 15 minutes, remove from the heat, and let sit for another 5 minutes.

Fluff with a fork. Set aside and let cool.

Add the garlic, stirring constantly, and cook for about 40 seconds until very fragrant.

Add the corn, stirring often, toast the corn for about 10 minutes until the corn turn into brown in spots. Remove from heat and let cool for a few minutes.

Meanwhile brown the tofu cubes over medium heat with the remaining oil in another nonstick skillet, stirring occasionally, about 8 minutes or so. Set aside.

In a small bowl, whisk together the dressing ingredients until well blended,

Pour over the salad, and toss until well combined and evenly coated. 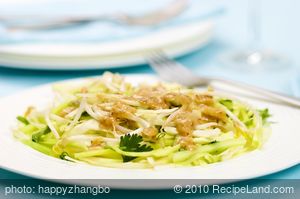 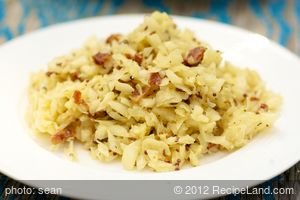 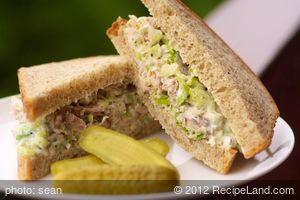