Cut the vanilla bean lengthwise into 4 sections and place it in a saucepan with the milk. Brink the milk to a boil and remove from heat.

In a stainless bowl, whip the egg yolks and sugar until foamy. Strain the milk into the egg mixture. Place the bowl on a double-boiler and mix with a wooden spatula until the mixture thickens and adheres to the spatula. Remove the bowl from the double-boiler and add heavy cream.

Place the mixture in a refrigerator until cold. Pour the mixture into an ice cream freezer and churn for 30 minutes or until stiff.

In a large bowl, combine the sugar, cooled butter, and salt. Add flour 1 cup at a time and mix. Add 1 egg and mix well but do not overwork.

Divide the dough mixture into two portions ⅔ and ⅓ parts of the dough. Let the dough rest in a refrigerator for at least 2 hours, overnight if possible. Roll out the ⅔ portion of dough until it's 13 inches in diameter. Place this layer in a buttered 10-inch pie plate. Leave any excess dough hanging over the edge of the plate. Place this dough in the refrigerator.

Roll out the ⅓ portion of dough until it's 11 inches in diameter. Refrigerate on waxed paper.

In a saucepan over medium heat, boil the heavy cream and sugar until reduced by one-half. Add the walnuts and cook for 5 minutes. Pour the cooked mixture into a bowl and refrigerate.

Remove the pie plate from the refrigerator and fill it with cooled walnut mixture. Take 1 beaten egg yolk and brush the pie dough around the lip of the plate. Cover the pie with the top dough, press around the edges, and remove any excess dough.

Score the dough with a fork in a crisscross pattern, then bake it in a 375℉ (190℃) oven for 30 minutes. Refrigerate until cold and serve topped with ice cream. 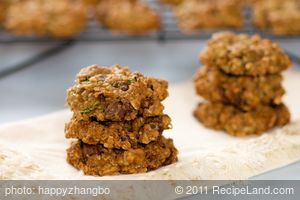 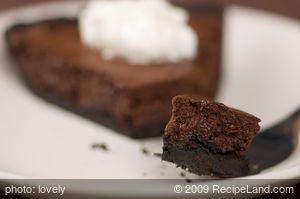 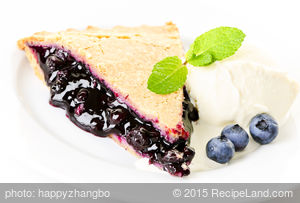