TOAST THE SESAME SEEDS by spreading them over the bottom of a pie tin.

Stir sesame seeds often, until they are golden.

With a very sharp knife, score the meat on each short rib in a crisscross pattern, making the cuts about ⅜ inch apart and cutting almost to the bone.

This will allow the marinade to penetrate and help tenderize the meat.

Place the short ribs in a large shallow baking pan.

Combine the rest of the ingredients, pour the marinade over the meat and toss well to mix.

Cover and refrigerate the ribs for 24 hours, turning them in the marinade several times.

Arrange the ribs on a rack in a shallow roasting pan.

Brush ribs with a little of the marinade. Roast them uncovered for 20 minutes.

Remove the pan from the oven, turn the ribs and brush them with the marinade.

Raise the oven temperature to 500F. After the ribs have stood for 10 minutes at room temperature, return them to the oven and roast them for 5 minutes.

Turn them again, baste them lavishly with the marinade and roast them for 3 to 5 minutes longer for rare, about 8 minutes for medium-rare.

Brush the ribs with any remaining marinade and serve them with fluffy boiled rice and a crisp salad. 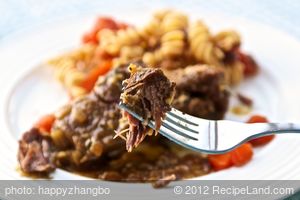 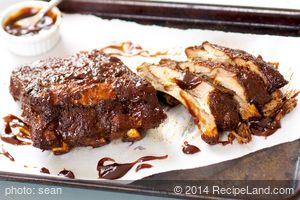 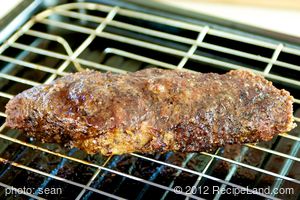