Classic German beef pot roast that is marinated with vinegar, spices and seasonings. It's traditionally served with red cabbage and/or spaetzle or even pasta. Perfect for celebrating Oktoberfest.

Two to three days before serving, wipe the meat with a damp cloth, then place in a large plastic bag.

Refrigerate, turning bag each day. (If you like sour sauerbraten, let marinate for 4 days.)

Rub the surface lightly with flour. In a Dutch oven, heat oil and slowly brown the meat well on all sides.

Add 1 cup of the marinade liquid plus some of the vegetables and bay leaves.

Cover tightly and simmer on surface heat or in a preheated 350oF oven for 3 to 4 hours until the meat is fork tender.

If needed, add more marinade during the cooking time to keep at least ½ inch liquid in the Dutch oven.

Remove the meat and keep warm until ready to slice.

Into a large measuring cup, strain the drippings.

Add several ice cubes and let stand for a few minutes until the fat separates out.

Remove the fat, then make the gravy.

TO MAKE THE GRAVY: In the Dutch oven, combine the gravy ingredients, stir and cook for about 5 minutes over medium heat until gravy has thickened.

Taste for seasonings and adjust if necessary.

This makes about 3 cups of gravy.

what type of Vinegar isit ?, I would like to cook this for my german girl friend, can anyone help me with this please.
David.

Just edited the recipe, so the vinegar should be apple cider vinegar. And any other question, let us know! Wish you and your girl friend will enjoy this dish :)

I had this in Stuttgart and I loved it. I'm so happy to find your recipe. We will be making this this coming week. 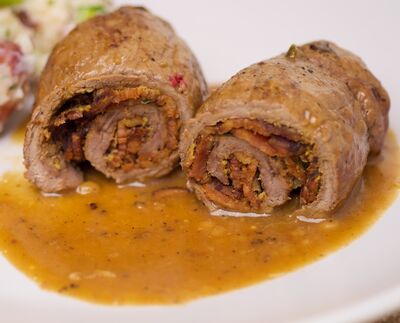 Turn your kitchen into the perfect Oktoberfest destination

Oktoberfest celebrations are wrapping up in many communities around the world. Many celebrate Octoberfest throughout the month of October.