Made with ground beef, pine nuts, almonds and chestnuts, this stuffing is perfect for any holiday you celebrate!
52

Cook the chestnuts: Cut a groove on each chestnut and roast them on the stove (if you've got an electric stove, placing the chestnuts on the burner will do the trick, though you'll have to do some cleaning afterwards.) When they're done, peel them. Watch your hands.

Brown the beef with half the butter. Add the rice, salt and a little water, and let it cook on low heat, until the water is absorbed.

Boil the liver, mince it and add it into the rice and meat. Add the almonds, prunes, raisins, chestnuts (cut in chunks) and pine nuts. Add a small amount of water and let everything simmer until the water is absorbed. 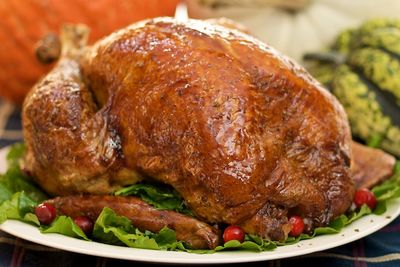 Thanksgiving is here in a couple of days. That means most of us are going to have a festive feast soon that for many impacts their waistline. Follow these tips to avoid packing on the pounds while still enjoying the feast.