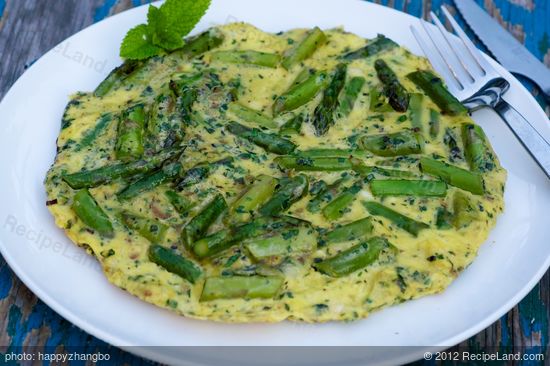 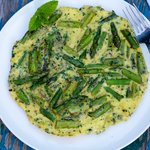 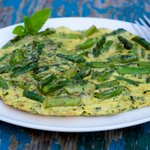 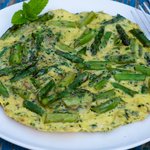 Seasonal asparagus, fresh mint, parsley leaves, and parmesan cheese together make a delicious frittata that fits in any moment.

Heat the oil in a 8-inch nonstick skillet over medium hight.

Add the red onions, stirring often, and cook until the onions become soft and slightly browned, about 5 minutes.

Stir in the mint, parsley, and aspragus until well combined.

Season with a bit salt and black pepper.

Arrange the mixture into a single layer. Reduce heat to medium-low.

While the vegetables are cooking, mix together cheese, salt, black pepper to taste, and eggs until well blended.

Pour the egg-cheese mixture over the vegetables in the skillet.

Let the mixture cook for 1 to 2 minutes, until it starts to set.

With a heat-proof rubber spatular lift the edge that's closer to you, then tilt the pan to allow the runny mixture to go underneath.

Continue to cook for another 1 minute, then lift the edge and tilt the skillet once again.

Keep repeating the same steps until the eggs are not runny, about 2 to 3 minutes.

Put the skillet into preheated oven, and bake until it sets completely, about 3 minutes.

Remove from the oven, loosen the edge with a rubber spatular.

Transfer the frittata onto a serving plate.

Cut into wedges and serve warm. 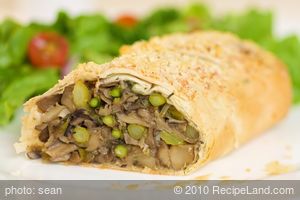 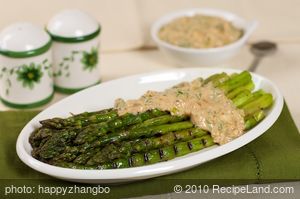 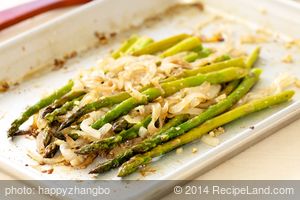