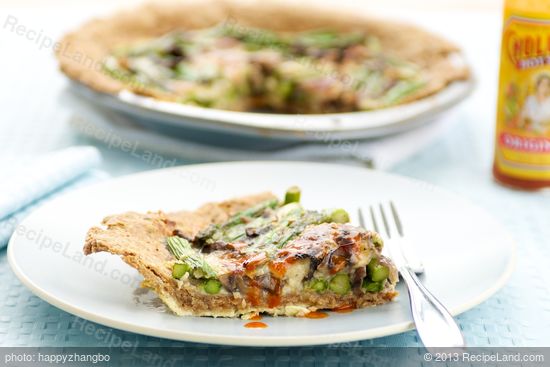 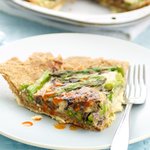 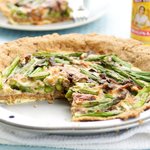 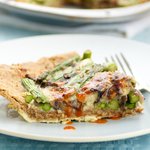 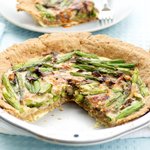 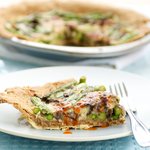 Cheesy and delicious. The whole wheat crust is so flakey and tasty, the filling is made with sauteed onions, asparagus and gruyere cheese, packed with yumminess. It's great for an appetizer, or a vegetarian main course.

To make the curst:

Rub the flour and butter with your finger tips in a large mixing bowl until it becomes crumbly.

Add the olive oil, salt, egg and water, mix until well combined, the dough comes together and forms into a ball.

Or you make the crust in a food processor.

Roll out the dough on a well floured working surface or cutting board to a 13-inch round.

Line the dough into the prepared pie plate the and trim any excess.

Cover the pie shell with the foil and fill with pastry weights or dried beans.

Meanwhile, heat the oil in a large nonstick skillet over medium-high heat until hot.

Add the onions, stirring often, and cook for about 8 minutes or until deeply browned.

Stir in the asparagus, and cook for another 2 to 3 minutes until the color becomes brightly green.

Season with salt and black pepper to taste. Remove from the heat

Arrange the asparagus and mushroom mixture evenly in the base of the baked pie shell.

Whisk the egg, milk, cheese and hot sauce if using together in a medium bowl and pour over the asparagus mixture.

Bake in the preheated oven for about 40 minutes or until just set.

Remove from the oven and let cool for a few minutes.

Cut into wedges Serve warm or at room temperature with extra hot sauce if needed. 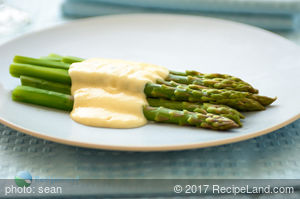 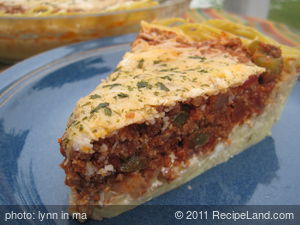 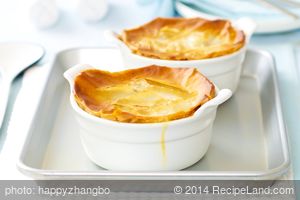