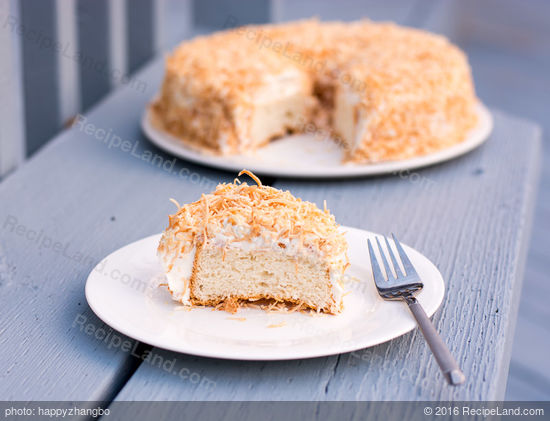 Onto a sheet of wax paper, sift the flour 3 times.

In a large bowl with an electric mixer, beat the egg whites with the salt until they are frothy.

Add the cream of tartar and beat to soft peaks. Beat in ½ cup sugar, a little at a time.

Add the vanilla and almond extract, and beat the whites to stiff peaks. Fold in the remaining ½ cup sugar, a little at a time.

Sift the flour over the whites in 4 batches, folding it in gently after each sifting. Fold in the coconut. Spoon batter into a 9-inch tube pan, 3½-inches deep.

Hang the cake in the pan, upside down, on the neck of a bottle and let it cool for 90 to 120 minutes or until cooled completely.

Release the cake with a sharp knife, turn it out on a rack and invert it onto a cake plate.

In a metal bowl, whisk together the sugar, egg whites, zest, juice, corn syrup, and a pinch of salt.

Set the bowl over simmering water, and cook, whisking, until it registers 140 degrees F on a candy thermometer.

Remove pan from heat and whisk the mixture over the hot water for 3 minutes.

Remove the bowl from the water and, with an electric mixer, beat the frosting at high speed for 7 to 10 minutes or until it is cool and holds stiff peaks.

Spread top and sides of the cake with the frosting and coat the outside with the toasted coconut. 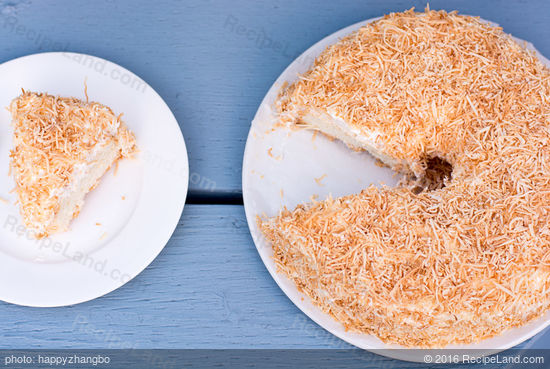