Put ricotta and eggs into a large bowl and stir until well mixed.

Blend in all other ingredients.

Slice the sausage into rounds about ⅜ inch thick.

Brown in a little oil until cooked through.

Cut the salami and ham slices into strips about 1 x ¼ inches.

Make or thaw or unwrap the pizza dough.

Mix the meats into the cheese filling.

Put the larger piece into the lightly-floured cake pan, molding it so that it completely lines the pan, with at least ½ inch hanging over the edge.

Fill with the cheese-meat mixture.

To allow for expansion, fill to about ½ inch below the top of the pan.

Wet the exposed dough edge with egg white, place the other piece of dough on top, and pinch the two pieces together.

Trim neatly to make a seal.

Brush egg yolk over the top of the pie (this will brown during baking).

Puncture the top of pie in several places with a knife (make sure the holes are large enough not to close up during baking).

Remove from pan and cool on a wire rack. 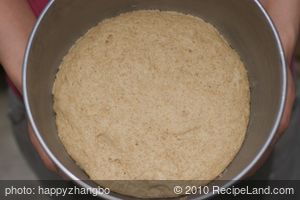 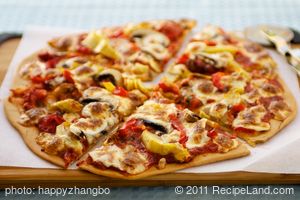 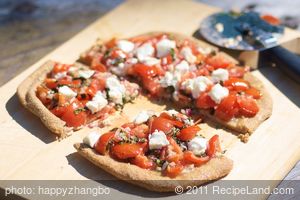