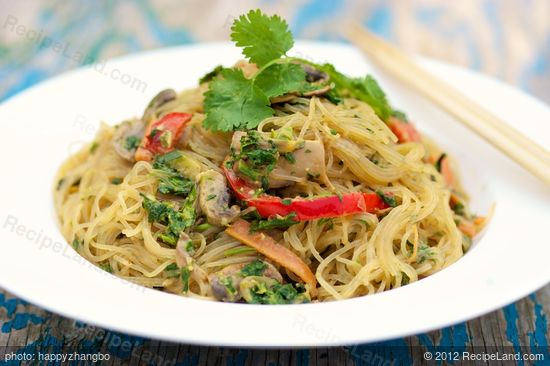 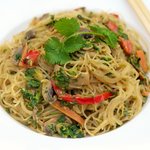 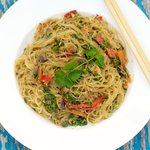 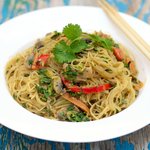 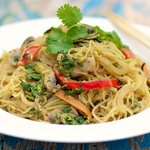 Made this dish for supper today, and it was absolutely delicious. Loved this hot peanut sauce so much, it was creamy, slightly sweet, sour and spicy, which made the dish taste amazingly flavorful and tasty.

Prepare noodles according to package directions (cook 4 to 6 minutes, or to taste), reserve 1 cup of cooking water in measuring cup. Set noodles and water aside.

In large skillet or wok heat oil at medium hight heat until hot. Add onion, stirring occasionally, and cook for about 5 minutes, or until deeply browned.

Add mushrooms, stirring a few times, and cook until mushrooms are browned, another 3 to 5 minutes.

Add red bell pepper, carrot and zucchini, stirring often, and cook for another 3 to 4 minutes until vegetables start to become soft but still crunchy

Stir in spinach and garlic, and cook for another 1 to 2 minutes until well combined. Pour soy sauce and broth into wok or skillet, and cook until heated through, 2 minutes.

Remove from heat, add noodles, cilantro and peanut sauce, and toss until well combined and coated. (If noodles seem a bit dry, add cooking water as needed to make it easier to mix and moisten noodles) 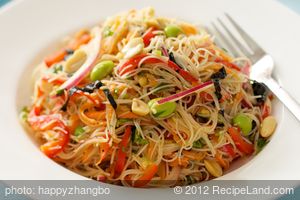 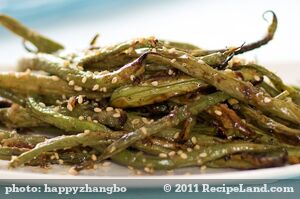 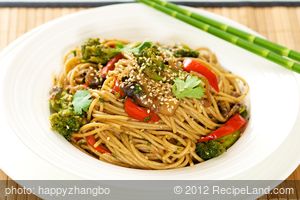