Rinse the duck and dry thoroughly.

Combine the star anise, Sichuan peppercorns, cinnamon and salt in a skillet; heat, shaking the skillet, until the spices begin to smoke and the salt starts to turn a light golden color.

Sprinkle some of this mixture into the cavity of the duck including all the star anise and the cinnamon stick.

Add the ginger and scallion to the cavity and skewer closed.

Rub the outside of the duck with the rest of the seasoned salt mixture and hang the duck by a string (around the neck if the duck has a head or under the wings if not) overnight in a cool, airy place.

The next day, steam the duck on a plate in a large steamer or covered wok for an hour to an hour and 15 minutes.

Cool and rub all over with a small amount of dark soy sauce.

Wrap in foil and refrigerate until ready to cook.

Several hours before cooking, take the duck out of the refrigerator and make a light batter: Mix the sherry with the cornstarch and sugar until well blended then stir in the egg white.

Rub thoroughly over the duck and allow to sit.

Heat a large quantity of oil until nearly smoking in a 16-inch or larger wok or in a large deep fryer.

Immerse the duck in the oil and fry until golden, about 15 minutes, spooning the oil continuously over the exposed part of the duck.

You might want to turn the duck during this time.

If so, carefully remove it with a large slotted spatula or skimmer and drain the cavity into a bowl before adding it again to the hot oil.

When the duck is done, drain it on paper towels.

Let the duck rest for 5 to 10 minutes, then carve it Western-style or cut into pieces, Chinese-style.

A suggestion is to serve it on a bed of watercress that has been sprinkled very lightly with sesame oil.

The juices from the duck will blend with the sesame oil to make a sauce.

TEA-SMOKED DUCK; Follow the steps above and steam the duck only 1 hour.

Before refrigerating, line a large wok with aluminum foil and spread 1 cup of uncooked rice, 1 cup of sugar and ½ cup of Chinese black tea over the bottom.

Put the duck on a metal rack suspended over the tea mixture; cover with the wok lid.

Moisten paper towels and press them around the edge of the wok lid forming a seal.

Turn the heat to medium high and allow the duck to smoke for 15 to 20 minutes.

Turn off the heat and let the duck sit for another 45 minutes.

Uncover, wrap the duck and refrigerate. Then proceed as in the master recipe. 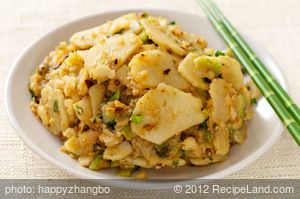 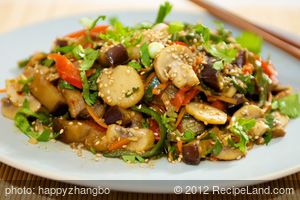 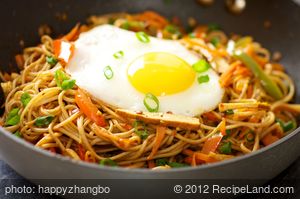