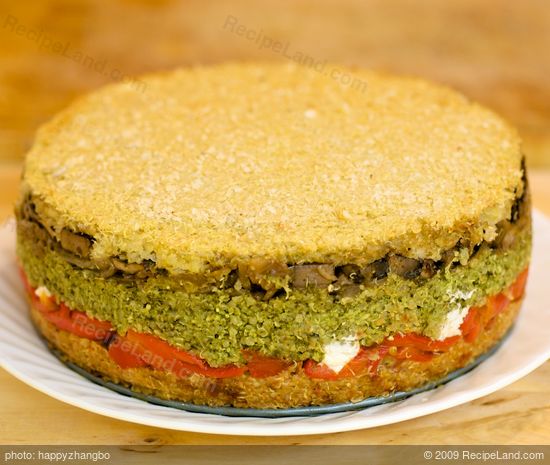 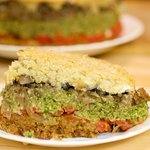 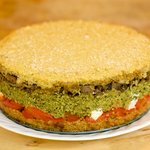 Quinoa is high in fiber, protein and gluten free. To make this quinoa lasagna, we use a spring-form pan layered with different flavored quinoa and vegetables, colorful and incredibly tasty.

Prepare the vegetables: Arrange cherry tomatoes and garlic, cut side up, on parchment paper-lined baking sheet.

Drizzle with 1 tablespoon oil, sprinkle with ¼ teaspoon salt and pepper. Add red peppers to sheet, cut side down.

Roast in the oven until garlic is softened, peppers blister and tomatoes begin to be dark around the edges, 30 to 32 minutes.

Let them cool enough for you to handle. You can turn off the oven now. Then squeeze garlic pulps. Peel and slice peppers. Set aside.

At the meantime, in a large pot and saucepan, heat ⅔ pot or saucepan water until boiling, put quinoa in the boiling water, cook until tender, 12 minutes. Drain and rinse, shaking in colander to remove excess water.

Transfer quinoa to a large bowl, fluff with a fork. Let cool. Add eggs, tossing to coat. Set aside.

Then in a food processor, blend sun-dried tomatoes, sun dried tomatoes oil, half of the roasted garlic and ¼ teaspoon salt and pepper until still slightly chunky.

Toss the mixture with 1 ¾ cups quinoa, press into a greased 9-inch springform pan.

Put the roasted cherry tomatoes, red peppers and half of the goat cheese on top, set aside.

Then toss ½ cup parmesan cheese with the remaining quinoa. Press the mixture into the pan, now the pan looks almost full, don't worry, just use spatula to press the quinoa mixture, it will be fine. Sprinkle the left parmesan cheese on top evenly.

Wrap the bottom of springform pan with double foil paper. Bake in oven for 50 to 60 minutes, until crusty and golden brown. Cool for about 15 minutes. Serve warm.

LINDA
PA
over 9 years ago

THIS RECIPE KICKS! MY WHOLE FAMILY LOVES IT
CLAP-CLAP FOR THE CHEF!

happyzhangbo
Lindsay, Canada
over 9 years ago

Glad to hear your whole family loves the recipe too. We made this recipe last year, and it was really delicious, we all loved it :)

I had my doubts but this looked so pretty I had to try it. OMG, the flavor was fantastic! It was the first time I used quinoa and it took me quite a bit of time to put this together but it was sooooooooo worth it. All the different textures and flavors were amazing.

Love your recipe ideas. I counsel people on a healthy food/diet program and am always looking for new ideas. Have bookmarked your site. I'll try this recipe maybe this weekend and let you know. Keep up the good suggestions!

Counseling people on a healthy food/diet sounds great, I do think nowadays lots of people's diet has become very unhealthy. Food is so basic but also is so important. You are what you eat tells us we really should pay attention to our diet. Glad to hear that you are counseling people on how to eat well. Keep up the good work! 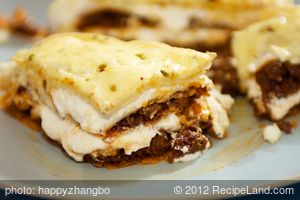 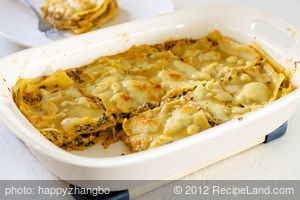 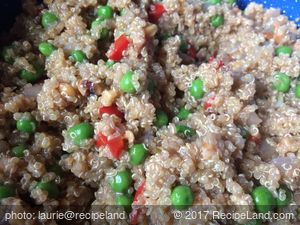