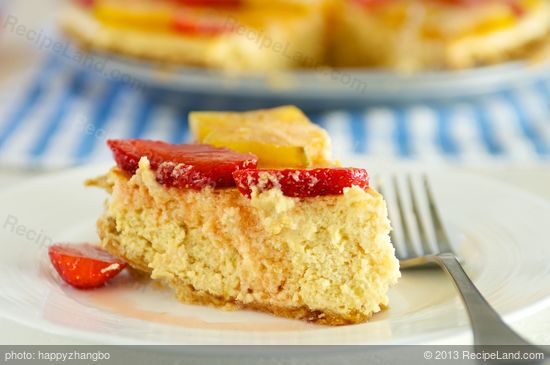 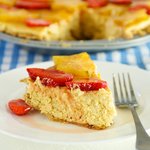 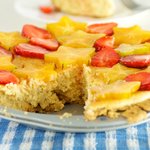 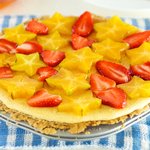 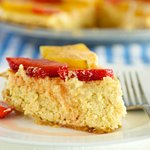 A light and delicious key lime pie is topped with fresh strawberries and star fruit, and drizzled with key lime syrup. It' not only an eye-pleaser, but also a belly pleaser.

To make the crust:

In a food processor, add all the crust ingredients, and process until coarse meal forms.

Transfer the mixture into a well-greased 9-inch pie plate or a removable-bottom tart pan.

Press with your fingers from the bottom all the way up to the edges to form a crust.

Bake in the oven for about 15 minutes or until the crust just starts to become slightly brown.

Remove from the oven and set on a wire rack.

Use an electric beater or a blender to whisk the egg whites in a clean, dry bowl until the soft peaks form, do not over whisk.

Gently fold one third of the egg white mixture into the lime - egg yolk mixture until just combined.

Repeat with the remaining egg white mixture until evenly combined.

Pour the mixture into the baked pie crust. Bake for about 20 minutes or until just set.

Remove from the oven and place it on the wire rack to cool. Place in the fridge for at least a few hours or overnight to chill.

To make the key - lime syrup:

Add the water and sugar in a small saucepan over medium heat, stir until sugar dissolves.

Bring the mixture to a boil. Reduce the heat and let simmer for 10 minutes or until mixture thickens slightly.

Stir in the lime juice, and remove from the heat. Let cool to room temperature, transfer into a small container, cover and chill in the refrigerator until ready to use.

Place the pie on a serving plate.

Mix together the strawberry slices, star fruit slices, and half of the lime syrup in a bowl.

Arrange the fruit slices on top of the pie.

Cut into the wedges and drizzle with the remaining lime syrup.

Note: You can use store-bought pre-made crust. If you don't have star-fruit, just use more strawberries instead 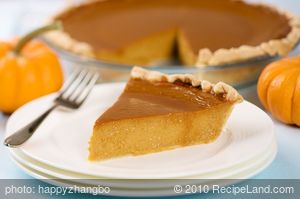 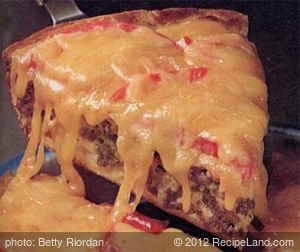 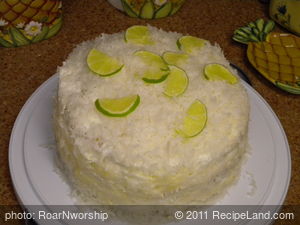