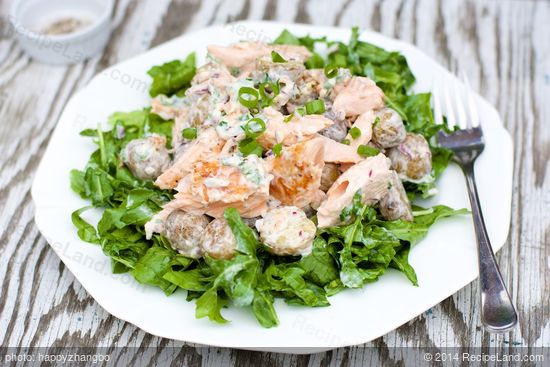 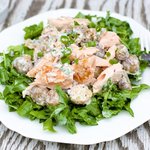 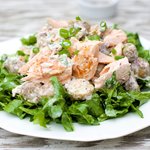 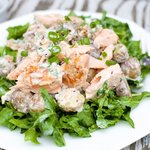 Creamy yet refreshing. The salmon and new potatoes were tossed with a creamy dressing, and it was so tasty.

Heat the olive oil in a medium or large non-stick skillet over medium heat until hot.

Season the salmon fillets generously with salt and black pepper.

Cook salmon until desired texture, 2 to 4 minutes per side.

Remove the salmon from the pan, and place it onto a plate.

Heat the remaining olive oil in the same pan over medium heat until hot again.

Add the halved new potatoes with cut side down, and cook for about 5 minutes or longer on each side until potatoes are folk tender and nicely browned.

Meanwhile flake the salmon, then mix together mayonnaise and sour cream until smooth.

Stir in red onions, and season to taste with salt and black pepper.

In a mixing bowl, add flaked salmon and cooked new potatoes, then drizzle the creamy dressing all over.

Gently toss the extra-virgin olive oil and lemon juice with arugula, and season to taste with salt and black pepper.

Divide the arugula between two serving plates, and top each plate with equal amount of salmon and potato mixture.

Sprinkle some scallions if desired. 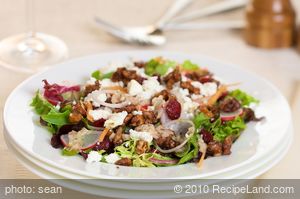 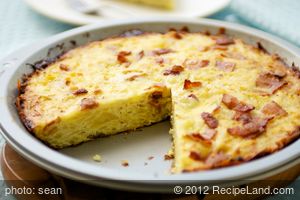 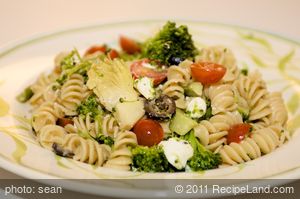