In a large covered saucepot over med-high heat, heat the water to boiling.

Add the clams and garlic and cook for 6 to 10 minutes, or until the clams have just opened.

Drain the clams, reserving the broth.

Strain the broth through coffee filters or several layers of cheesecloth to remove any traces of grit.

Remove the clams from their shells and chop them finely.

In a large heavy saucepot, cook the salt pork over low heat until the fat is rendered and becomes liquid.

Using a slotted spoon, remove the cracklings and reserve them.

Add the onions to the fat and cook over med-high heat for 5 to 7 minutes, or until softened but not browned.

Stir in the flour and cook for 3 minutes, stirring constantly.

Add the reserved clam broth, the 4½ cup of clam broth and the fish stock, whisking to remove any lumps.

Bring the liquid to a boil, then add the potatoes, reduce the heat and simmer for about 15 minutes, or until the potatoes are cooked through.

Stir in the clams, salt pork and the light cream.

Heat the chowder until it is the temperature you prefer. 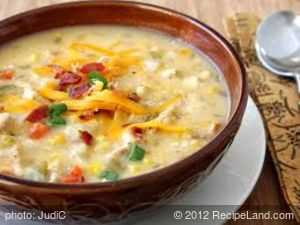 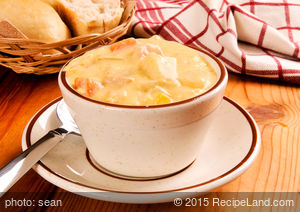 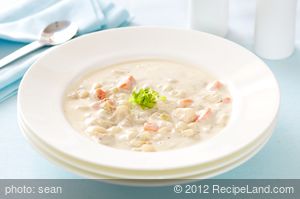