This is an easy to make version of real homemade Canadian Bacon. Also known as peameal bacon in Canada. Works wonderfully for peameal on a bun. 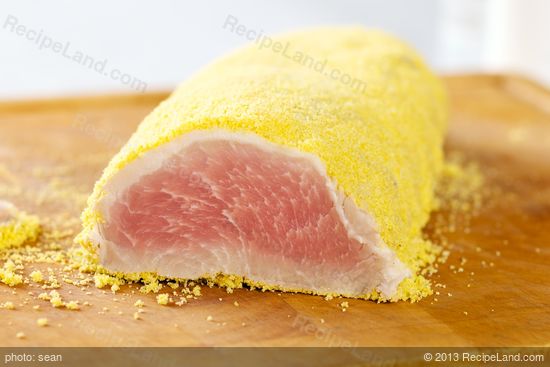 In a suitably sized pot:

Reduce heat and simmer for a few minutes.

Remove from heat and add the ice to cool.

In a large zipper bag, place the pork loin, cooled pickling liquid and remove as much air as possible before sealing.

Even better seal in a vacuum bag.

Refrigerate for at least 4 days and up to two weeks.

Pat dry and roll in cornmeal if you desire a truly authentic Canadian peameal bacon experience.

To keep longer, remove from from the brine after about 1 week and freeze until ready to use.

In Canada this is called "peameal bacon", with the peameal coming from dried yellow peas that originally were ground into meal and packed around the meat to preserve it.

Today the "peameal" has been replaced by cornmeal. Canadian Bacon is un-cooked, and un-smoked.

Due to the brining, the results will be a juicy and succulent with a sweet, nutty and slightly salty flavor.

Typically serving would be slices, that need a quick sear in a skillet or grill for the classic Canadian roadside treat "Peameal on a Bun".

This is not to be confused with what is sold in the US as "Canadian Bacon".

"Canadian Bacon" sold in grocers in the US isn't REAL Canadian bacon. Americanized Canadian Bacon is usually shaped round, processed, smoked and sometimes pre-sliced ready to eat meat product that is similar to ham. 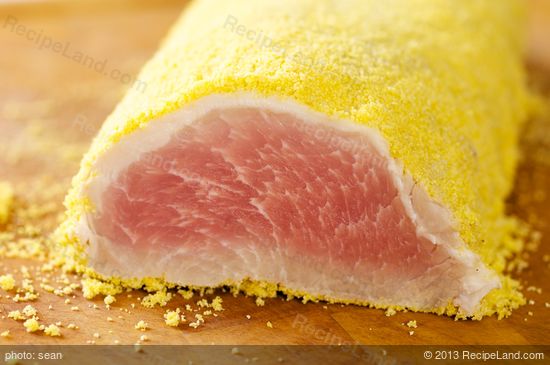 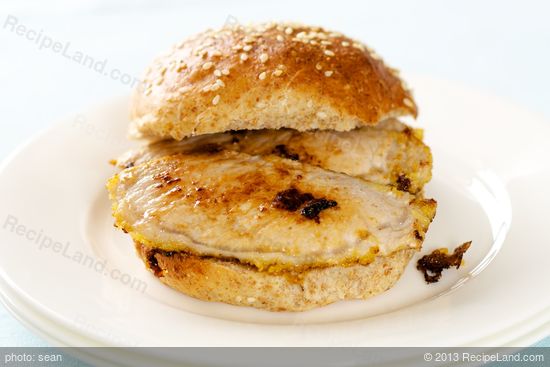 You did not mention the garlic or sugar in your directions!!

Obviously it would go into the brine

there is no hot sauce in this product... dumb version of a great meat.

Agree... No hot sauce! And no celery seed! Coriander seed and a couple of whole allspice would be appropriate.

I actually don't know but I would like a simple recipe for me to make for my son's project. You have to demonstrate how to make it, in less time. So, I would like to have a easy recipe you can make in 2 or 3 minutes.

how can you cure with no Pink salt.. this recipe will not cure!!

Meat will cure without nitrite (pink salt) with just salt or salt and sugar, but it will not turn pink.

The best part of making it yourself is avoiding nitrate and nitrite.

Tastes NOTHING like peameal bacon. This recipe is junk.

its probably your skill level

Terrible taste, not even close to actual peameal

Y'all have been lied to, and I'm sorry. The peameal bacon y'all get is a processed disgrace. Embrace the traditional sandwich of peameal, mustard, and cheese. Also, everyone complaining about spice just needs to accessorize with some hot sauce, or something, but post-brine, on plate.

This is not how peameal bacon is made. I specifically take issue with the addition of vinegar (note that in the photo, the edges of the meat are gray, this is because of the vinegar). The spices aren't quite right, but one must allow for some variation in the spices used.

This is no where near what real Canadian Back Bacon is. The recipe and brine is entirely different from this AND it usually dry cured. It can be wet cured but dry is better. I have made this for years!
Please do not mix this recipe with the traditional and very tasty CDN back bacon!!

I am looking for a true Canadian recipe if anyone would like to share it with me. I agree this is not authentic.

for true "pea" meal bacon, buy some dried yellow split peas and do a coarse grind, better than corn meal

This is Alton Brown's (Food Network) recipe for pickled pork. Hence the vinegar. He uses it for pickling pork butt for making red beans and rice.

Most recipes for pea meal bacon will have Prague Powder #1, salt, sugar, and possibly garlic and spices.