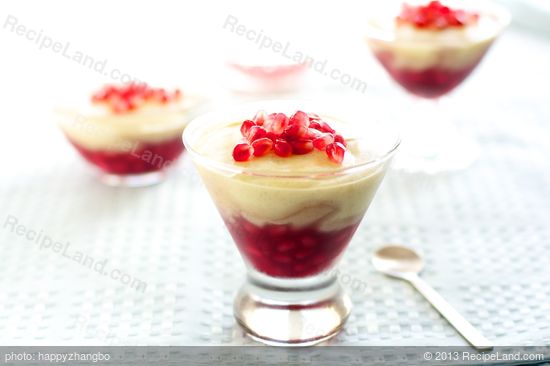 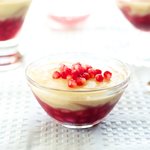 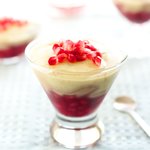 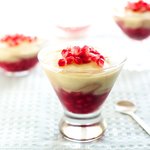 Creamy and rich custard on top. Sweet and sour pomegranate compote at the bottom. One spoonful of this parfait has all the deliciousness with great texture you are looking for.

Stir in 2 tablespoons sugar with 2 teaspoons cornstarch in a small saucepan.

Bring to a boil over medium-high heat and cook, stirring often, until syrupy, 4 to 6 minutes.

Transfer to a small bowl.

Keep the bowl in the refrigerator while you prepare the pudding.

Mix together milk and half-and-half in a medium heavy saucepan.

Scrape in seeds from vanilla bean (or add vanilla extract).

Bring to a simmer over medium heat.

Remove from the heat, cover and allow to steep for about 6 minutes.

Reheat the milk mixture just until steaming, bot not boiling.

Slowly pour ⅓ of the steaming milk into the egg mixture, and whisk until well mixed.

Pour the egg-milk mixture back into the pan.

Remove from the heat and whisk in butter.

Transfer the pudding mixture over the compote.

Cover and refrigerate until the pudding is well chilled and firm, at least 1½ hours.

Top each parfait with pomegranate seeds and a mint sprig, if needed.