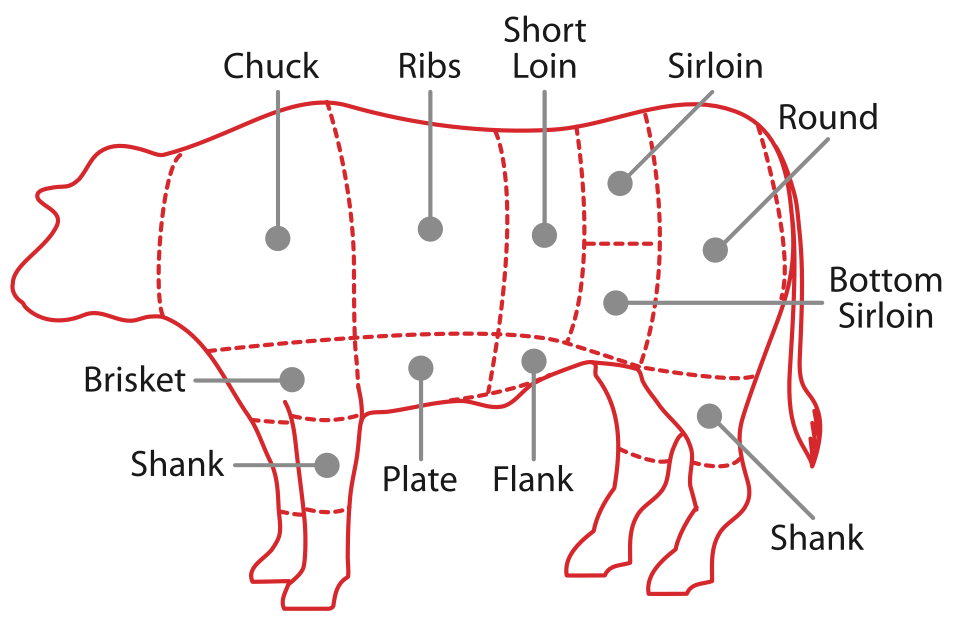 Comprehending all the different cuts of beef can be a little confusing. For example, did you know that a strip steak, New York strip, Kansas City steak, club steak, shell steak, and top loin steak all come from the same part?

Comprehending all the different cuts of beef can be a little confusing. For example, did you know that a strip steak, New York strip, Kansas City steak, club steak, shell steak, and top loin steak all come from the same section of beef?

Who wouldn't be confused with such jargon? The diagram below depicts all the cuts found on your typical bovine.

Beef is muscle tissue. The first thing that must be understood is that frequently used muscles are tougher and generally require long, slow, moist heat cooking methods to loosen their connective tissue, while lesser used muscles are tender and need dry heat methods.

The chuck, brisket, round and shank are the most exercised muscles and hence, the toughest. A pot roast can be made from chuck via braising, (cooking the meat in a small amount of liquid for an extended period of time).

The brisket is home to corned and barbecued beef. The infamous corned beef and cabbage is made from boiling the meat. Pot roast can also be done with brisket, again by braising.

The round includes the top round, bottom round, heel round, eye round, and rump roast. Sometimes ground beef is made from the round as well. Although all round cuts are tough, the top round is the tenderest, relatively speaking.

Because of this, it can be roasted. London broil comes from the top round and can also be grilled. All of the others however, do best made into roasts with moist heat methods. One exception is your deli roast beef.

Because it is sliced thin, producers can get away with roasting, (dry heat), the bottom or eye round which are cheaper than the top round. Notice that making a "roast" does not necessarily mean that the meat will be roasted.

At the risk of belaboring the point for clarification, roasts such as pot roasts from tough cuts, require braising. Roasts made from more tender meat are made by actually roasting.

The shank is definitely best when braised as in the classic dish osso buco. It can also be used for stews and stocks.

The short plate gives us short ribs which are braised or boiled as in New England boiled beef. Skirt steak, (from the short plate) and flank and hanger steaks, (from the flank), are delicious when grilled.

However, they must not be overcooked, benefit from being marinated, and should be cut against the grain for a softer texture. Mexican fajitas are often made from marinated strips of flank steak.

The sirloin provides a variety of sirloin steaks differing on where in the sirloin they are cut from. Sirloin can also be ground and mixed with ground chuck for primo hamburgers.

Finally, the creme de la crème of beef: the short loin. Picture a porterhouse or T-bone steak. The larger side is referred to by all the names at the top of the article: top loin, strip, New York strip, shell steak, etc.

Both the top loin and the tenderloin can be cut into individual steaks, or larger roasts. In the case of the top loin, the steaks may or may not be attached to the bone. The tenderloin is always boneless except when part of a porterhouse or T-bone steak.