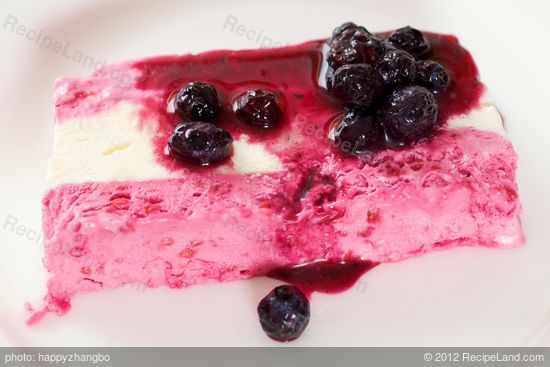 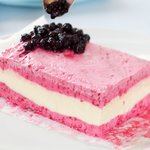 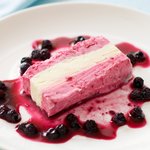 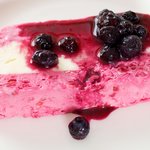 Semifreddo is another popular dessert in Australia besides pavlova that I made a few days ago. Semifreddo is basically made with egg yolks and heavy cream, it's rich, silky and decadent. Fruits, chocolate or nuts all can be added into the base, pour into a loaf pan, then simply freeze it until it's firm. It's usually served with fruits, or fruit sauce, or candied nuts.

In a small saucepan, add the frozen raspberries, and bring to a boil.

Simmer for about 10 minutes under low heat until part of the liquid has been evaporated and the raspberries become thick.

Remove from the heat and let cool. Stir in vanilla extract.

Meanwhile place a large piece of plastic wrap into a loaf pan, and allow overhanging around the edges.

In a large mixing bowl with an electric whisk, whisk the egg, egg yolks and sugar thick and creamy, about 5 minutes; start from medium speed, then increase to high after about 2 minutes.

Transfer the bowl over a saucepan of simmering water and whisk by hand whisk for another 5 minutes or until custard doubles in volume and ribbon like texture.

Pour ⅔ of the custard mixture into another bowl, pour in the cooled raspberries, and stir well.

You can use an electric hand whisk to do the work as well.

Remove from heat and set aside.

Whisk the cream in a large clean bowl with an electric mixer until soft peaks form, about 2 minutes. Do not over whisk, which will cause cream to separate.

Add ⅔ of the whipped cream to the raspberry custard mixture and gently fold until just combined.

Spoon half of raspberry cream mixture into the prepared pan, and let freeze for about half an hour or until firm.

Put both of the remaining mixtures into the frige to keep cold.

Spoon the cream custard mixture over the first raspberry layer, freeze for another half an hour or so or until firm.

Cover with a plastic wrap and freeze until the semifreddo is firm, at least 4 hours or overnight.

One hour before serving, add frozen blueberries and sugar in a bowl, and toss well.

Let sit in the frige until ready to serve.

About 20 minutes before serving, take the semifreddo out of the freezer, and let it thaw.

Lift up the overhanging plastic wraps and transfer the semifreddo onto a serving platter.

Spoon the blueberry sauce over the whole semifreddo or over each slice.

What a gorgeous, cool dessert for the heat of the summer! Yummy, too!