A simple yet flavorful and very hearty dish of Irish style cabbage and bacon. Only a few cost effective ingredients that turn into a flavorful dinner.

Cut the cabbage in half and boil for 15 minutes in salted water.

Drain, and soak in cold water for 1 minute, then drain well and slice.

Line the bottom of a casserole with half the bacon slices, then put the cabbage on top and add the seasonings.

If using a stove-top cast iron casserole, cover and simmer for an hour, until most of the liquid is absorbed.

If using a casserole that can't be placed on the burner (anything that isn't cast iron) cover with foil or a lid and bake in the oven at 350℉ (180℃) F for about an hour until most of the liquid is absorbed. 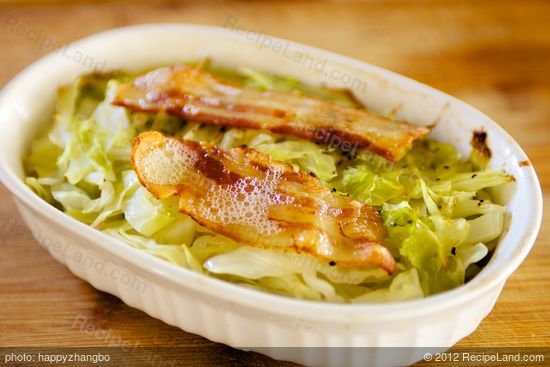 If desired you may wish to broil for several minutes to crisp up the bacon on top (although this would be non-traditional).