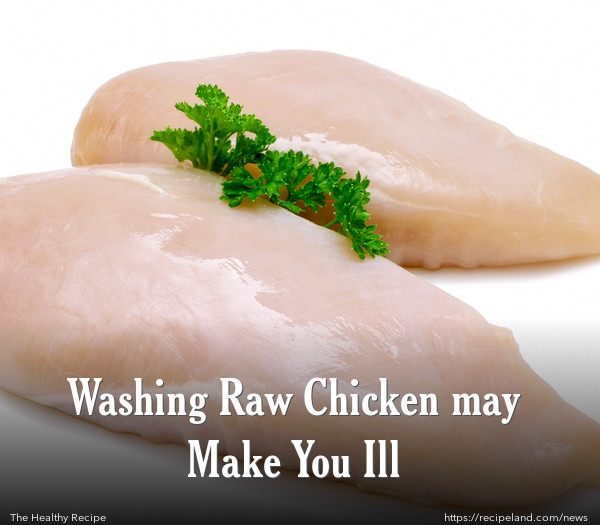 Many people are under the impression that washing raw chicken can help prevent food poisoning; however, it seems that just the opposite is true. Spreading bacteria becomes more likely when you wash raw chicken.

Food borne illnesses are a serious problem. For people who work in the food industry, careful precautions are critical. But, even for those cooking in their own kitchens, reducing the possibility of food poisoning is critical.

A recent study shows how this practice aimed at improved food safety can actually lead to a greater incidence of infection from Campylobacter bacteria, commonly found on raw chicken.

Washing raw chicken may rinse off certain types of bacteria that are on the surface of the meat, but, it has been shown that the water droplets that are splashed into the sink, on the body of the person washing, on the nearby cooking and food prep surfaces and onto clothing can actually increase the likelihood of transmission of the Campylobacter germs.

Food safety organizations are urging celebrities on popular cooking shows to avoid taking part in this dangerous activity, as their actions on their staged kitchens are often imitated in people’s homes when they follow the televised recipe preparations.

Cross contamination is one of the major issues when it comes to handling raw chicken. Campylobacter can cause an infection known as campylobacteriosis, which causes diarrhea, severe abdominal pain, nausea, vomiting and fever.

The infection will usually become apparent between 2-5 days after exposure to the bacteria. Most people will make a full recovery in a few days, but those with weakened immune systems may suffer more severe illness, possibly even life threatening illnesses. Small children and the elderly are at the highest risk for complications from campylobacteriosis.

For those most severely affected, the infection may lead to the development of Guillain-Barre syndrome, a rare disorder in which your immune system attacks your nerves, and can result in partial paralysis. Irritable bowel syndrome has also been known to develop following this infection.

Because campylobacter is one of the major causes of severe diarrhea in the United States, and one of the major causes of food poisoning—affecting about 14 out of every 100,000 people per year in the United States, food safety campaigns have been targeting public awareness to help combat the spread of infection as a result of exposure to this bacteria.

Not only is the public being educated, but food safety councils are working with farmers regarding containment of the bacteria to prevent further contamination.

Using caution when handling raw chicken is essential, since even one drop of the harmful bacteria that is often found on chicken—whether it is campylobacter, E. coli, salmonella or another superbug that is widely found on raw poultry, can make a person ill.

Proper food handling is essential, and avoiding cross contamination should be a priority in every kitchen!