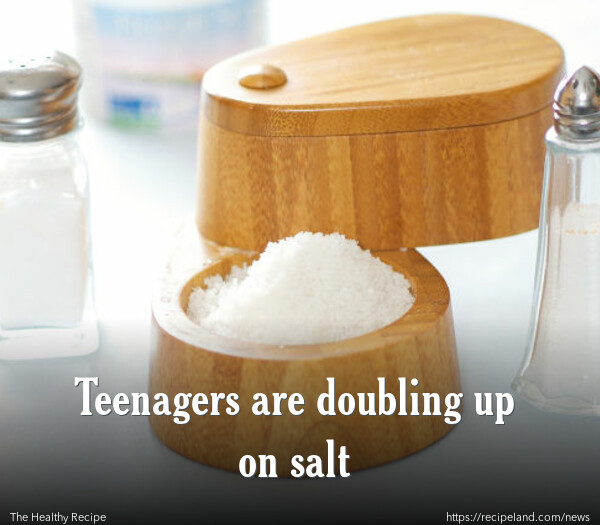 The average teenager in the US consumes double the recommended amount of salt according to a new study.

Researchers from the University of California, San Francisco found teens eat more than nine grams of salt, about 3,800 milligrams of sodium per day.

About 80% of salt comes from processed or prepared foods, of that 35% is from cereals, breads and pastries say the researchers.  Researches predicted that if teenagers reduced their salt intake by 3 grams per day a projected decrease in teen hypertension would reduce by projected 44% to 63%. Other long term benefits would reduce high blood pressure, heart disease and risk of stroke.

Lead author Kirsten Bibbins-Domingo says “Most of the salt we eat is not from our salt shaker, but salt that is already added in food we eat.” reports the Toronto Sun. The salt is found hidden in breads and cereals, canned foods and fast-food.

Health Canada recommends the best way to reduce salt intake is the eat fresh, unprocessed foods.  That means break out the cookbooks and make sure home cooked recipes are available to help prevent teens from turning to processed food.

Wendy’s classic 1/4 single hamburger without cheese contains 880 milligrams of sodium, more than 1/2 of the daily recommendation.  Combine that with fries and that brings the total sodium up to 1,340 milligrams, dangerously close to the total daily recommended with a single meal.

Don’t even think of ordering Wendy’s Baconator, at 1,830 milligrams of sodium puts your salt over the top with a single sandwich.

Even a children's McDonald’s Happy Meal with cheese, heck you’d need 3 of them to fill up your average teenager, with “low-fat” milk and “healthy” apple dippers delivers a whopping 910 milligrams of sodium into the bloodstream of your child.

The best way to help your teenager avoid the fast food trap is to make sure there’s homemade quick and easy grab and go breakfasts and snacks.  Some ideas to help cut down on the salt can be found in previous reports Save time with Baked Breakfast from your Freezer and Grab-and-Go Breakfasts Straight From Your Kitchen: Save money and your waistline.