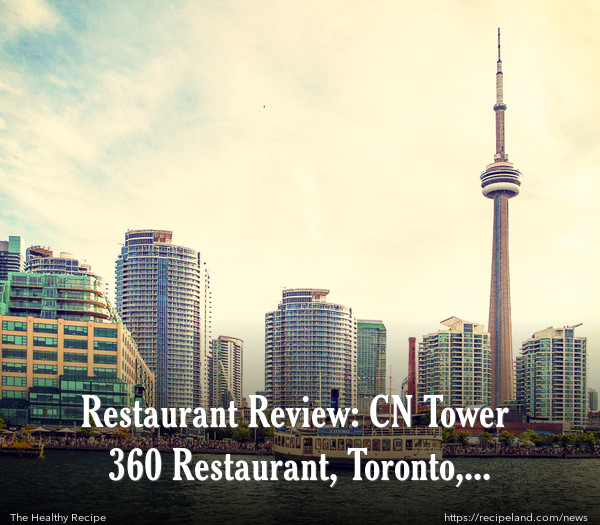 The CN Tower in Toronto, Canada is the tallest building in the world. Above the lookout decks is a nicely decorated restaurant aptly named “360 Restaurant”.

The best thing about this restaurant is the view. The food on the other hand left much to be desired.

For a starter I had “Wild Mushroom and Asparagus Ravioli, Truffle butter, Parmesan cheese”.  The dish arrived soaked in what seemed to be about 1/4 cup of overheated machine oil.  There were 3 smallish raviolis that looked like mostly pasta with 2 small spears of asparagus that had been roll cut and a fair number of ordinary white button mushrooms that had been cut in half and seared brown in the machine oil and scattered over the raviolis. On top of that were three small shavings of parmesan.

Upon tasting my suspicions were confirmed, the only thing I could taste was overheated oil.  I could actually squeeze about 1/4 teaspoon of oil out of each mushroom.  The same with the asparagus, burnt hot oil was the only taste I could detect. I shifted the contents of the plate to one side and stared at a puddle of oil pooling in the middle.  There seemed to be a complete lack of any seasoning, certainly no taste of butter and not the slightest hint of truffle.

I tried one of the raviolis. There was some sort of grayish micro-diced stuff on the inside that didn’t taste of much of anything and lots of very thick tasteless pasta.

That was about as far as I was able to get and simply left the remains behind. My dining partner tried one of the raviolis. She took a small bite, made a face and returned it to my plate.

The plate of mostly uneaten food was whisked away shortly without a word.  I was left wondering where were the wild mushrooms and the truffle butter?

The watery sweet corn grits weren’t too bad, a bit under seasoned but not bad.  I guessed there was about 10 small chopped up kernels of corn in total. The ginger carrot broth tasted of carrot but I couldn’t detect the slightest amount of ginger.

I ate the goat cheese (what little there was) and the roasted red peppers and slurped up the few spoonfuls of soupy corn grits and carrot broth.  The portobello mushroom caps and oil soaked napkins were left on the plate.  Again the plate was whisked away professionally and in short order.

So far I had been served about $3 worth of badly prepared ingredients, was waiting for my dessert all for the bargain price of $48.

About 5 minutes later our server came over and told me he knew I wasn’t at all happy with the mushrooms, we had a brief chat where I asked him what kind of oil they were using which he told me was canola oil and he told me they will not charge me for the meal if I wasn’t interested in the dessert.

This seemed very gracious and more than fair. I was also told there was no need to pay for the access to the observation lookout even though I didn’t have to pay for the meal.

My dining companion faired a bit better. She also choose from the $48 prix fixe menu. Which seemed to be the only available option.

Her starter was Organic Baby Arugula, Spiced chickpeas and spelt salad citrus vinaigrette.  It was small but the arugula was tasty, there was one small orange slice of orange along with about 20 chickpeas and some spelt that was cooked nicely.  It was good a bit small but seemed a bit underdressed which is better than over dressed.

It arrived with three large slices of deep fried eggplant, topped with mozzarella and three very thick unevenly sliced under-ripe beefsteak tomatoes.  There was a small amount (several teaspoons) of yogurt and 5 stalks of oiled fried asparagus.  There were no grill marks noticeable.  I tried some of the eggplant slices and could taste, well, breaded deep fried eggplant there was no hint of curry whatsoever and there was a notable lack of seasoning. There was also a side dish of lightly curried rice that seemed a bit dry. She wishes there was more yogurt so the dish wouldn’t be so dry.  The most tasty part of the dish was the asparagus. She didn’t finish and left most of the dried out rice behind.

We were both wondering where the cherry tomatoes disappeared to. Obviously delivering what is ordered is not something kitchen considers a priority.

For dessert she had German Black Forest Cake, Cherry Kirsch, shaved chocolate that was tastefully plated and served cold as if straight from the refrigerator.

Afterwords she mentioned the only memorable item of the dinner was the dessert, not too sweet and the cherry kirsch worked perfectly together.  I suspect the dessert was brought in from the outside which would explain the high quality.

The restaurant was modern and clean. The service was decent with an extensive wine list and we were there long enough for a complete rotation for a wonderful view of the city skyline. The total bill was $54 due to my no charge partial meal.  We had a $100 gift certificate so I rounded up the bill to $100 with the balance left as a tip for our gracious server Carlos.

After a few hours the taste of burnt oil finally left my mouth and starving I stopped and grabbed a slice of Pizza Nova pizza. It was quite shocking after the bland food, the reheated pizza slice was just bursting with flavor. My favorite slice, Pizza Pollo, chicken, sauteed garlicy spinach, roasted red pepper and feta.  At least Pizza Nova uses a decent olive oil instead of machine oil which makes all the difference in the world. Total cost: $4.63.