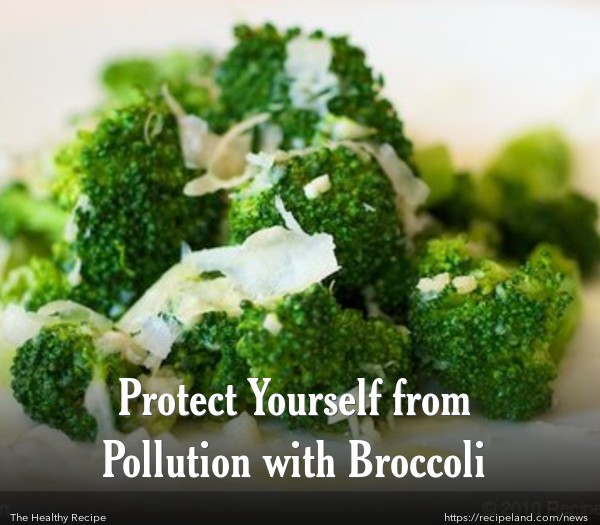 New research finds that broccoli causes the body to expel dangerous pollutants absorbed from the air. Drinking just one half cup of a drink made with broccoli sprouts was effective to significantly increase the amount of benzene and acrolein released through the urine.

According to the Centers for Disease Control and Prevention, benzene is a colourless chemical that rapidly evaporates into the air and floats on top of water. Benzene occurs naturally in the environment through volcanoes and forest fires. It is also released into the environment through cigarette smoke, exhaust fumes from motor vehicles, gas station emissions, and factory emissions.

The Department of Health and Human Services has concluded that long-term exposure to benzene causes leukaemia in humans.

The Environmental Protection Agency points out that acrolein can be released into the air through the burning of tobacco, gasoline, or oil. This cigarette ingredient damages DNA and stops it from repairing itself. It can also compromise the body’s ability to remove dangerous toxins from the lungs.

Researchers from the Johns Hopkins Bloomberg School of Public Health speculated that the glucoraphanin in broccoli could help the body expel benzene and acrolein.

He-He Township, Qidong, China was selected as the target area for this study. This rural area of the Yangtze River delta is known for having high amounts of air pollution. Air pollution causes cancer, irritates the lungs, and contributes to cardiopulmonary diseases.

Two hundred and ninety-one participants were studied for twelve weeks. The control group was given a beverage containing sterilized water, lime juice, and pineapple juice. The test group was given the same drink with a powdered form of broccoli sprouts added.

Urine specimens were gathered and analyzed from both groups to determine if there was any difference in the amount of benzene and acrolein emitted in the urine of participants.

From the first day, significant results were seen. The test group had 61% more benzene and 23% more acrolein in their urine than the control group. The results of this study were published in the online edition of Cancer Prevention Research.

According to study co-author Professor Thomas Kensler of Johns Hopkins Bloomberg School of Public Health, “This study points to a frugal, simple and safe means that can be taken by individuals to possibly reduce some of the long-term health risks associated with air pollution. While the government leaders and policy makers define and implement more effective regulatory policies to improve air quality.”

Researchers speculate that broccoli could also be effective against pollutants contaminating water and food. They plan to conduct further clinical trials to determine how much and how often the broccoli beverage needs to be consumed to effectively combat environmental pollutants.

The World Health Organization reports that up to seven million deaths each year are caused by air pollution. Recently, the International Agency for Research on Cancer determined that particulate matter and air pollution cause cancer in humans.

John Groopman, Professor of Environmental Health at the Johns Hopkins Bloomberg School of Public Health pointed out, “Air pollution is a complex and pervasive public health problem. To address this problem comprehensively, in addition to the engineering solutions to reduce regional pollution emissions, we need to translate our basic science into strategies to protect individuals from these exposures. This study supports the development of food-based strategies as part of this overall prevention effort.”