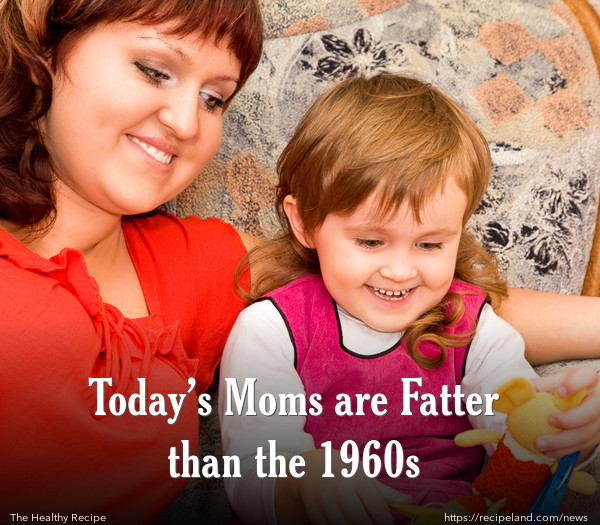 In the last several decades, the average activity level of mothers has decreased dramatically. This has led to not only an increase in obesity for women, but for their offspring, as well.

Even though today’s moms may seem more active, with so many opportunities for yoga, Zumba or even more intense workouts like CrossFit, believe it or not, these latest fads burn fewer calories than the traditional job of being a stay at home mother in the 60s.

The highly active, physically intense work of running a household—as well as fewer opportunities for sedentary activity, such as watching television, meant that it was easier for moms to control their weight “back then” than it is today.

According to a study released by the Mayo Clinic, mothers of today actually require 1200-1500 fewer calories than their 1960s counterparts. This is one of the major contributors to today’s obesity epidemic.

More calories consumed, and fewer burned means that today’s moms are carrying around quite a few more pounds and have more difficulty maintaining a healthy weight.

One of the lead researchers, Edward Archer, from the University of South Carolina, explains, "I'm not saying that women should do more housework, but they need to add physical activity back into the day.”

Unfortunately, the overall activity level of people in general has decreased over the past several decades. Studies have shown an increase in the obesity of men that is related to a decrease in the number of jobs that require physical labour, and the same is being shown for women now.

Archer states, "The reason we focused on mothers is that the vast majority of caregivers in the world are women," and that mothers have the greatest influence when it comes to the health condition of future generations.

The effects of the decreased activity level of mothers begins to affect children while they are still in the womb. Research shows that the amount of body fat and the overall composition are determined before birth.

As mothers become more inactive, they become more obese, and this is passed along to their children. The result is that those children are then predisposed to become obese due to being inactive and having a greater fat composition in the body.

Archer clarifies, “Given that physical activity is an absolute prerequisite for health and wellness, it is not surprising that inactivity is now a leading cause of death and disease in developed nations."

The study examined activity levels over the course of 45 years, and analyzed 50,000 participants. Since 1965, the physical activity of women with children under the age of 5 has decreased dramatically—down from 44 hours to fewer than 30 hours today.

What this means is that mothers in 1965 could consume over 200 calories per day more and not gain weight. Those women with older children also showed a decrease in physical activity equaling about 11 fewer hours per week, or a little more than 175 calories per day.

Not only are mothers less active during their daily activities, but they have reported an increase in sedentary activities from about 18 to 25 hours per week. This includes television viewing, computer work and taxiing the kids around in the car.

This decrease in activity may not seem significant, but the reduced caloric expenditure has led to weight gain for many moms. Because our weight is so closely connected to our caloric intake and our activity level, it is important to take in the right amount of calories for our activity level to maintain a healthy weight. Cutting screen time and adding in some physical activity can help!