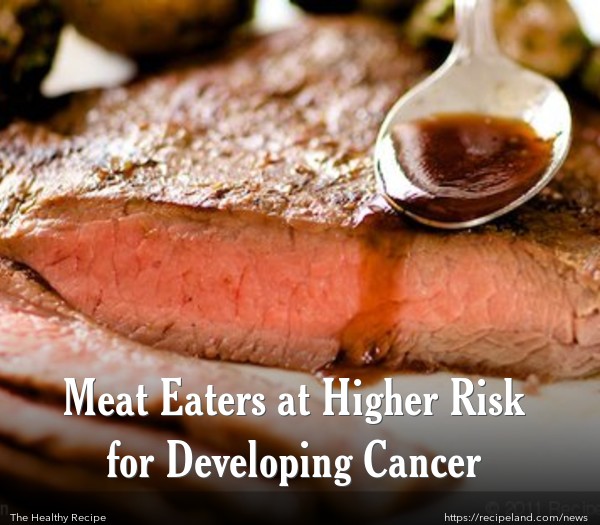 Eating less meat may help to reduce the risk of developing several different types of deadly cancers. By increasing fruits and veggies, you can experience many health benefits!

Those who eat meat may be at a higher risk for developing certain cancers, according to a new study published in Nutrients.

According to the study, which carefully examined cancer rates in more than 150 different countries, eating meat is one of the factors thought to contribute to higher cancer levels in the population. Other risk factors include smoking, poverty and having low levels of Vitamin D.

Certain countries, particularly those with a high rate of consumption for animal products, showed the highest cancer rates in the study.

Those countries in which people were more likely to consume meat, dairy products, fish and eggs had a higher incidence of specific cancers, including kidney, breast, ovarian, prostate, thyroid and testicular cancers.

Those countries in which people were exposed to less sunlight, therefore having lower levels of Vitamin D showed a higher incidence of brain cancers, as well as cancer of the bladder, lung, and kidney. Incidence of melanoma and Hodgkin’s lymphoma were also higher.

Dr. William Grant, one of the lead authors of the study, discussed some of the main reasons why eating animal products may increase the risk of cancer.

He cites the increased presence of a certain growth factor, known as IGF-1. Because this particular hormone exists in all animals, as it is a requirement for growth, it can actually cause not only human growth but tumor growth as well.

This may be one explanation for why people in Eastern countries, who tend to consume more vegetable-rich diets, tend to be smaller and shorter, and have less incidence of cancer, too.

Not only do animal product naturally contain the IGF-1 hormone, but many animal products have added hormones by the agricultural industry. These artificial hormones are often blamed for many problems, and now cancers have been added to this list.

It should be noted that cancers in people with primarily meat diets were certainly present before the use of artificial hormones for animal growth was initiated. Even those who consume only organic meats showed a higher incidence of cancers, according to the study.

Most people do not recognize the risks associated with a meat-heavy diet. This study clearly shows that there are risks involved that are directly related to the consumption of animal products.

Not only are there hormones that you need to worry about, meat contains high levels of iron, which is known to affect the body by releasing oxidating free radicals into the system.

A completely vegan diet is not necessarily the solution, but increasing the ratio of vegetables to meat can help to decrease cancer risks.

Not only will there be benefits of having less hormones in your system, the veggies that you eat will add plenty of fibre, nutrients, vitamins, minerals and antioxidants, all of which are known to lessen the odds when it comes to developing cancer.

In conclusion, it should be noted that some of the best ways to reduce the risk of developing many different kinds of cancer include increasing the consumption of fruits and vegetable, decreasing consumption of animal products to between 12-15% of your diet, quitting smoking and getting enough sunlight exposure to boost Vitamin D levels.