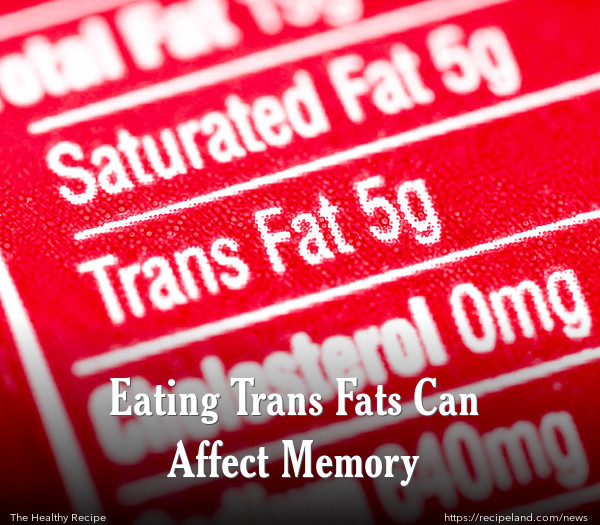 Trans fats are often used in processed foods to make them taste better, improve texture, and help them to last longer. However, recent studies have shown that trans fats can also cause memory problems, particularly in men under the age of 45. A recent study conducted by the University of California at San Diego was published in the June 17 edition of PLOS ONE.

The study examined data from more than 1,000 men and women. Participants were required to fill out a survey related to their dietary habits. They were also asked to take a memory test that evaluated their word recall abilities. Results showed that the average man under the age of 45 was able to recall 86 words. However, for every additional trans fat gram consumed on a daily basis, their performance decreased by 0.76 words. For those young men with dTFA at the highest levels, this meant recalling 12 fewer words than their study counterparts who consumed no trans fats.

Beatrice Golumb, M.D., Ph.D., a lead author of the study and professor of medicine at University of California at San Diego School of Medicine, stated, "Trans fats were most strongly linked to worse memory in men during their high productivity years. Trans fat consumption has previously shown adverse associations to behaviour and mood -- other pillars of brain function. However, to our knowledge a relation to memory or cognition had not been shown."

Men were the primary focus of the study mainly because there were a small number of women available for the study. However, the findings from the female participants did not alter the results. The decreased word recall was not correlated to older populations. Dr. Golumb concluded that this may be related to the dietary effects being more prominent in younger adults. As people aged, insults and injuries to the brain accumulate and affect memory scores.

Trans fatty acids have many adverse health effects, including reduced metabolic function, poor insulin control, overall inflammation, and cardiac effects. As of 2013, the United States Food and Drug Administration (FDA) announced that trans fats were not considered to be safe. The Centers for Disease Control estimates that decreasing dTFA consumption may reduce the number of heart attacks by 10,000-20,000 per year, and result in 3,000-7,000 fewer deaths in the United States alone.