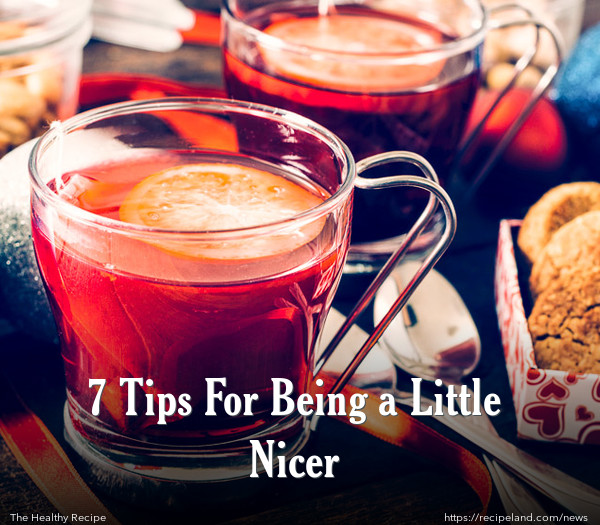 Being kinder is not only a way to help others, but it can also make you feel better about yourself. Try these 7 easy ways to be a little nicer.

Recent research conducted at the University of Colorado Boulder showed that participants who held onto a cup of a hot drink (typically tea or coffee), as opposed to a cold drink, tended to judge others as having more generous and caring characteristics.

A second component of the study found that subject who held a hot therapy pad selected a gift for others over a gift for themselves. Scientists concluded that physical warmth can increase our emotional warmth toward others.

When you are actively engaged with natural beauty, you tend to act more kindly. If you cannot get outdoors, then try putting a plant on your desk.

A recent study conducted at the University of California, Berkeley, found that the participants who filled out surveys about their emotions while surrounded by beautiful plants tended to engage in follow-up craft activities of making peace cranes for a relief effort in Japan. Subjects who filled out the survey with no plants, or less beautiful plants, made far fewer cranes. This suggests that natural beauty can help nourish positive emotions and kindness toward others.

3. Allow yourself to be vulnerable.

When you can demonstrate that you are truly happy to meet someone, you must avoid using powerful poses and instead reveal some vulnerability. When you lean in toward a new acquaintance, even giving a slight bow, you are more likely to feel kindness toward them. Also, it can help to step toward someone when shaking hands, as opposed to making the other person step toward you.

When you have a constant death grip on your cell phone, you are slowly reducing your ability to empathize. A study conducted at Stanford University reviewed more than 70 different studies involving more than 14,000 college students between 1979 and 2009.

They found a sharp decline in empathetic behaviours and feelings over the last ten years of the study, and researchers attribute this to the increasing use of cell phones and the reduction in human contact or face-to-face interactions that occur as a result.

When you experience the awe of hiking and observing nature in person, you may be more inclined to be generous to others. A recent study found that pro-social behaviours increased when people were exposed to feelings of awe and wonder, which often accompany treks into nature.

A classic study conducted at Princeton University found that students in the theological seminary who were in less of a hurry to get wherever they were headed were more likely to offer help to someone in need. Subjects were first asked to complete personality surveys regarding their religion, and then they were sent to another separate building to continue the study.

One group was told they would be talking about jobs related to the seminary, another group was told that they would be talking about the parable of the Good Samaritan. Along the way to the second part of the study, participants encountered someone in need, and researchers found that those who were in more of a hurry, or under more urgent time restrictions, were less likely to help the person suffering.

Certain scents are known to elicit certain feelings and moods. A recent study found that certain scents may also contribute to our desire to perform random acts of kindness. During the study, 8 people were instructed to stand outside of a bakery or outside of a clothing store. They were told to drop a glove in front of a passerby.

After repeating the experiment more than 400 times, researchers found that more than three-quarters of the passersby stopped to help in front of the bakery, while only half of those passing the clothing store stopped. Researchers attribute the discrepancy to the smell of baking bread and pastries.

Ultimately, being kinder can cause others to be kinder to you in return. Remembering the simple “Golden Rule” can help, meaning you should treat others the way that you want to be treated. The same goes for negative acts—don’t do things to others that you don’t want done to you.