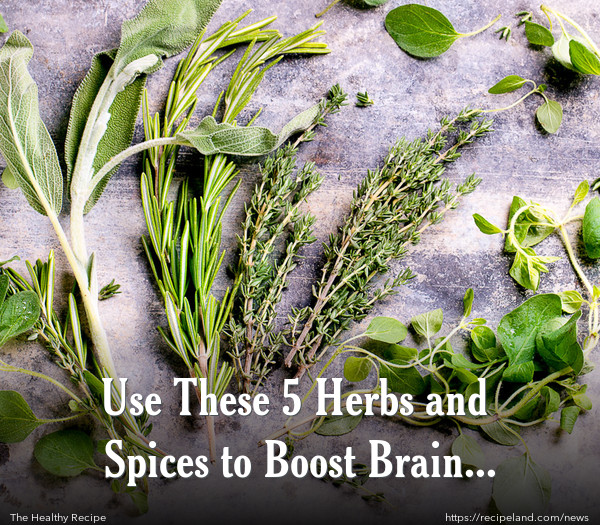 Some recent studies have shown that certain herbs and spices are not only useful for helping with weight control, but also can help protect your brain. Here are some of the most common ones and their associated benefits.

A recent study conducted in Brazil found that a particular compound contained in these spices, a flavonoid called apigenin, can help to strengthen the connections between neurones, and even help stem cells become specialized neurones.

Although this study was conducted in a controlled laboratory setting, and the results have not been generalized to humans yet, researchers think that they may have discovered a lead to helping brain cell formation and communication, which may help with depression, Alzheimer’s and Parkinson’s.

Apigenin is much like estrogen, according to Giana Angelo, Ph.D., a research associate at the Micronutrient Information Centre at Oregon State University’s Linus Pauling Institute, and states, “In this study, apigenin was able to mimic estrogen and elicit the same types of cellular changes.”

Tea drinkers already know some of the great benefits of chamomile, and that it can help reduce stress. Although, like apigenin, the studies that have been conducted are not yet generalized to human subjects, the compounds contained in chamomile can contribute to bind with brain receptors for certain important chemicals, which may help to reduce anxiety.

A small study which involved the administration of chamomile to participants with generalized anxiety disorder found that after 8 weeks the participants reported less anxiety.

Humans have immune cells called microphages which are designed to destroy foreign particles. Angelo explains that patients with Alzheimer’s have microphages that do not work properly. When this occurs, there is a buildup of beta amyloid plaques, which are thought to be related to the disease process for Alzheimer’s.

Sage is thought to help improve memory. There have been some small studies that explored the effects of two capsules of sage extract on participants’ memory function, as compared with a control group.

Angelo states, “Other studies in animals indicate that essential oils and extracts of sage block the activity of an enzyme that degrades a neurotransmitter involved in many brain functions, including learning, memory, and attention.” Before using sage supplements, be sure to consult with your doctor, because sage may affect blood pressure as well.

There have been some pretty significant implications for the use of garlic, which may or not have actual medical merit. Research in 2007 suggested that garlic was able to cure brain tumours. While this is not exactly true or verified, researchers do know that garlic contains several compounds that can kill cancer cells.

Angelo cautions, “We can’t make the leap from this study to what ingestion of garlic will do in a real live human brain.” This is mainly due to the fact that researchers used much higher amounts of garlic than are typically found in foods, but there is some exceptional promise in the research.

As you are trying to eat clean, start adding more of these powerful herbs and spices to your recipes to boost brain power!

Makati, Philippines
over 1 year ago