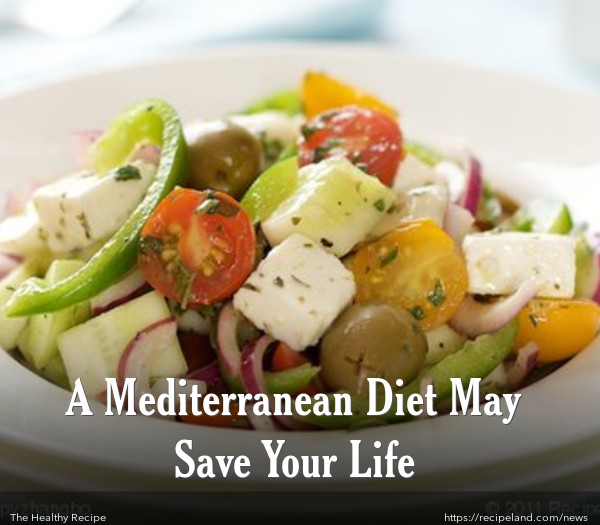 You may not need to cut calories to improve your health—just change the foods that you are choosing. A Mediterranean diet may be just the answer!

Mediterranean diets, which happen to be loaded with certain ingredients such as extra virgin olive oil, may have a dramatic impact in reducing the risk for heart disease as well as diabetes.

A recent study that evaluated the diets of over 3500 participants found that those following a Mediterranean based diet had a 30% lower risk of developing certain serious health conditions—including heart disease and diabetes, compared with a control group who consumed a regular low-fat diet.

Dr. Jordi Salas-Salvado, one of the head researchers in the study which was conducted in Spain and recently published in the Annals of Internal Medicine, explains, “Randomized trials have shown that lifestyle interventions promoting weight loss can reduce the incidence of type 2 diabetes, however, whether dietary changes without calorie restriction or increased physical activity also protect from diabetes development has not been evaluated in the past."

A Mediterranean diet will tend to be heavily loaded with healthy vegetables, healthy whole grains, fish and plenty of healthy fats, such as the kind found in olive oil and many nuts.

Because the diet is not loaded with red meat or dairy, the amount of saturated fat consumed tends to be quite low in comparison with many other diets and lifestyles.

These components are known to reduce overall inflammation in a person’s body, which lowers the risk of heart disease and diabetes.

Type 2 diabetes can develop when the body becomes insulin resistant and the amount of glucose that is not properly processed reaches dangerous levels. Insulin is a hormone that regulates blood sugar, ensuring that it is properly converted into energy to fuel the body.

Participants were selected based on the criteria that none had diabetes when the study began. Each person selected for the study did have other risk factors for heart disease and diabetes, including smoking, obesity and/or hyperlipidemia (high cholesterol).

Calories were not specifically limited on any of the diets studied, nor was the amount of exercise reported by the participants considered as a factor.

The groups were studied over a period of four years. At the conclusion of the study, it was determined that just under 7% of those on the extra-virgin olive oil subjects developed diabetes, with nearly 7.5% of those in the “nut based” diet group. Nearly 9 percent of those following the low-fat diet developed diabetes within the four year period.

Dr. Salas-Salvado states, "These benefits have been observed in participants between 55 to 80 years old at high cardiovascular risk, and, therefore, the message is that it is never too late to switch to a healthy diet like the Mediterranean."

He indicated that the best results can come from a healthy lifestyle with a Mediterranean based diet, combined with low calorie and low fat options, as well as physical exercise.

There may be significant global implications related to reducing not only heart disease and diabetes, but obesity and many other chronic health problems by adopting a Mediterranean based diet.