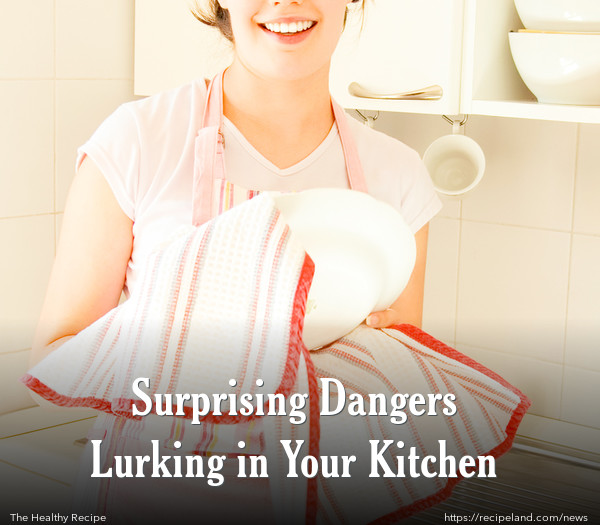 Most people think that the biggest dangers in the kitchen are sharp knives and hot surfaces. Some actually know that there can be dangerous bacteria. But, few people can name the biggest hiding places for these germs and understand truly how to prevent them.

In the kitchen, the most common place for germs to hide is on your hand towels. Interestingly, many people will touch the towel before washing their hands, whether to place it conveniently or wipe dampness off of their hands. This can lead to the spreading of very dangerous bacteria.

Another interesting hiding place for bacteria is on cell phones. A surprisingly high number of people use their cell phones while preparing meals, leading to significant contamination of the electronic devices. Few people regularly clean their cell phones, and the bacteria is easily spread. Many people also take their mobile phones into the bathroom with them, another opportunity for them to collect harmful bacteria.

After videotaping more than 120 people while they prepared their meals, it was discovered that the use of tea towels or hand towels was responsible for most of the cross contamination that occurs in the kitchen. Jeannie Sneed, M.D., from Kansas State University, and one of the lead researchers on the study commented, “First, participants were observed frequently handling towels, including paper towels, even when not using them for drying. Towels were determined to be the most contaminated of all the contact surfaces tested.” This is generally because people would often touch the towel prior to washing their hands, or after improper washing. Once the towel is contaminated, even adequate washing will result in cross contamination when people use the same dirty towel.

Keeping towels clean is not difficult, if you are careful about washing them. Towels should be kept separate from other laundry. They should be washed at least once per week. They should be hung to dry, not rolled in a ball. When washing, use hot water, at least 90 degrees Celsius, and use a good laundry detergent. Bleach can be used on white towels. People should not share towels.

The study found that salmonella bacteria can grow overnight on towels, even if they are rinsed and dried. It is important to ensure that any time you handle food, you are using clean towels and washing your hands properly. Additionally, taking a cell phone into the bathroom or using it while preparing a meal should be avoided.

Wiping the surfaces of a cell phone with a disinfectant wipe can help reduce the presence of E. coli and norovirus, which are commonly found in bathrooms and can easily make their way onto your cell phone.

With more than 125,000 people hospitalized in the United States alone each year for food poisoning, and at least 3,000 deaths, paying attention to where bacteria might be lurking is important to your health!