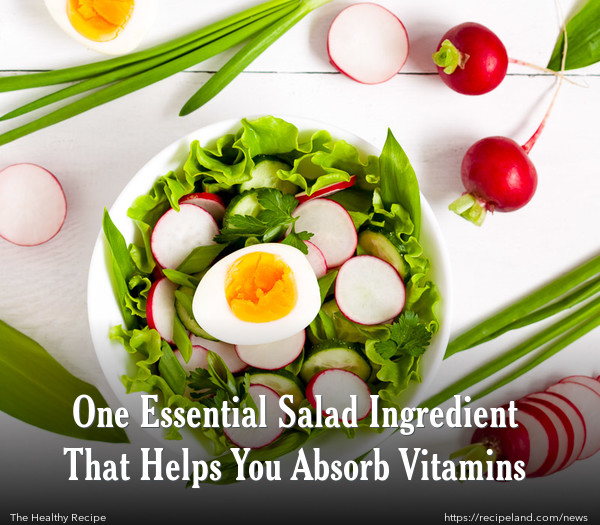 Eating at a salad bar is generally a healthy choice, but you can make it even healthier. When you add a hard-boiled egg or two to your salad, you may absorb even more of the previous vitamins and nutrients in the salad.

A recent study presented at the American Society for Nutrition’s 2015 Meeting revealed results from research conducted at Purdue University, which concluded that eggs can help you absorb carotenoids. Carotenoids are antioxidants that can help reduce the risk of developing eye disease and certain cancers.

Participants in the study consumed three different types of salads, which included raw tomatoes, shredded carrots, baby spinach, romaine lettuce, and goji berries. One version contained no egg, one version contained 1.5 scrambled eggs, and a third version contained 3 scrambled eggs. Participants had blood work drawn before and after the meals, and results showed that those who consumed the higher amounts of eggs had greater absorption of carotenoids, especially beta-carotene, alpha-carotene, lucopene, lutein, and zeaxanthin. Those who consumed the highest amount of eggs showed three times the absorption of those with no eggs included in their salads.

Lead researcher, Wayne Campbell, Ph.D., a professor of nutrition science at Purdue University, stated, "The presence of eggs enhanced absorption of the carotenoids in all the vegetables to a significant degree—by 500% at a minimum. Carotenoids are fat-soluble provitamins, so when the oils in the egg yoke are absorbed, the carotenoids go along for the ride."

Don’t be fooled by egg whites, because these contain no fat, which is where the most antioxidants are found.

Similar results were noted in a study that examined nutrient absorption for unsaturated oils, like canola oil and soy oils. What this indicates is that your salad dressing can also have an effect on your body’s ability to absorb the vitamins and nutrients. Avocados also showed this healthy effect, plus added extra monounsaturated fats.

Eggs can not only help with the absorption of vitamins and minerals from other veggies in your salad, but they also provide significant nutritional benefits on their own. Eggs are often considered to be a gold standard of protein, containing 7 grams of protein in only 70 calories. They also provide high amounts of iron, carotenoids and vitamins. Most studies have now concluded that the cholesterol contained in eggs is nothing to worry about, either.

Not only will adding eggs to your salad boost your absorption of nutrients, but you can also have a lower risk of developing type 2 diabetes when you regularly consume eggs.