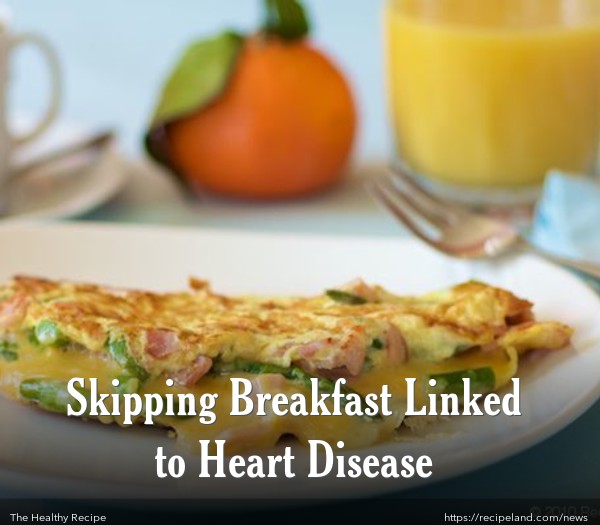 It turns out that breakfast really is the most important meal of the day when it comes to lowering the risk of heart attack among men according to a recently released study conducted by Harvard and published in July 22, 2013 edition of the American Heart Association journal Circulation.

Researchers from the Harvard School of Public Health examined data compiled over a 16-year period (1992-2008) from 29,902 male participants.  Information was gathered from these men, healthcare professionals aged 45-82, from surveys they completed about their eating habits.  Data about their general health over this 16-year period was also included in this study.

While this study examined a variety of factors that could contribute to heart attack, such as physical activity, alcohol consumption, medical history, and sleep habits, as well as diet, Harvard researchers concluded that skipping breakfast did increase the risk of heart disease among men.

They found that men who reported skipping breakfast were 27 percent more likely to have a heart attack than men who did not skip breakfast.  These men were on the younger end of the focus group and were more likely to be unmarried, working fulltime, and less physically active than their older counterparts.

They were also more likely to be smokers and were heavier drinkers than the men who reported eating breakfast.  This does not demonstrate that skipping breakfast leads to smoking or heavy alcohol consumption but that the choice to not eat breakfast often indicates an unhealthy lifestyle.

This study also found that men who skip breakfast tend to make poor eating choices throughout the day, causing significant damage to their overall health, such as weight gain and a higher risk of diabetes, in addition to a higher risk of heart disease.

Other studies have demonstrated that people who skip breakfast are 21 percent more likely to develop type 2 diabetes and 15 percent more likely to be significantly overweight.  This is due to the fact that the foods eaten at breakfast, such as fruit, yogurt, and foods rich in fiber and essential nutrients, are often healthier than foods eaten later in the day and are not replaced in later meals.

Men who skip breakfast often end up gorging on larger, higher-calorie meals at the end of the day.  Eating two calorie-dense meals in the afternoon and evening, instead of smaller meals spread throughout the day, can lead to high cholesterol and blood pressure and puts added stress on the body as it tries to digest these heavy meals.

While this study did not examine women, researchers speculated that a corresponding link would be found between skipping breakfast and a higher risk of heart disease amongst women as well.  A study released in the June 2013 issue of the American Journal of Clinical Nutrition examined the eating habits of 46,289 women living in the United States who were free of cancer, heart disease and type-2 diabetes and employed in the field of nursing.

Beginning in 2002, the eating patterns of these women were examined over a six-year period.  This study concluded that those who did not eat breakfast were more likely to develop type-2 diabetes than those who did eat breakfast and that this risk was even higher among women who were overweight.