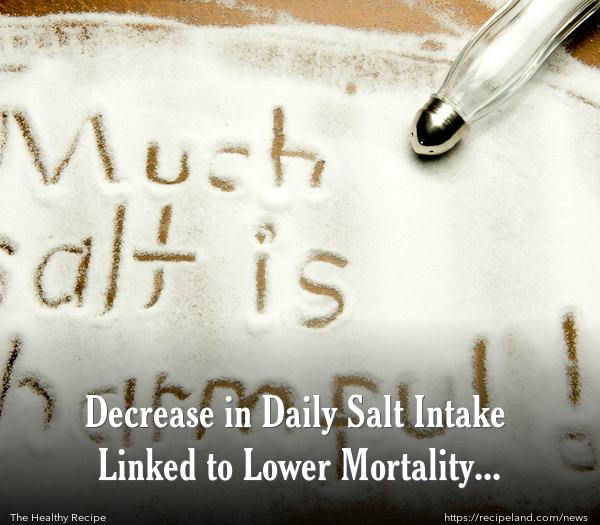 It has long been thought that salt consumption can lead to heart disease. Decreasing intake of sodium can lead to lower blood pressure and reduce the incidence of hypertension, a contributing factor for stroke and heart disease.

The average intake of salt for people living in the UK was reduced from approximately 9.5 grams per day to close to 8 grams per day, which is a 15% decrease overall. This drop in intake is attributed largely to the public efforts of the Food Standards Agency, which has been effective at convincing food manufacturing companies to limit the salt that is added to their products.

Researchers have acknowledged that other changes in lifestyles have also contributed to the reduction in mortality from stroke and heart disease, such as lower cholesterol intake and lower smoking rates, though the average weight increased. The average intake of fruits and vegetables also increased, indicating that many are making healthier food choices.

The study examined the health habits of more than 30,000 participants, drawing conclusions after analyzing many factors, but primarily the amount of sodium that was consumed daily. One of the leaders in the quest to promote public education about sodium, Clare Farrand, states, "It would now be a gross breach of ethical and corporate responsibility for companies not to reduce salt as the benefits of salt reduction are now so clear."

There are some critics that claim other factors may be more relevant to the results of lower mortality rates from stroke and heart disease, in addition to the lower salt intake, but further research is indicated before stronger or more widespread measures are imposed upon the food industry.

But, for now, the UK seems to be leading the way globally when it comes to public health campaigns about the benefits of reducing sodium in order to decrease the incidence of heart disease and stroke, and deaths related to these conditions.

, United States
over 2 years ago

My doctor is not in agreement with me about the question of salt and the effects on blood pressure. I have had very high and hard to control bp readings for more than a year, and I have had some pretty good success with keeping it under control by staying on a near no-salt diet. I am now totally convinced that salt has a
very negative effect on my blood pressure. If I eat something with more than about 4% sodium, my bp will ramp up to a dangerous level within about 48 hrs. I try to stay at or under 2%.