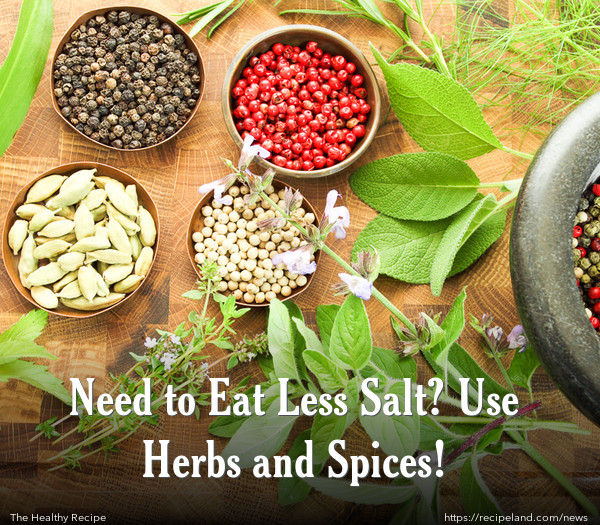 Most people consume far greater amounts of sodium than recommended. Increased sodium intake is linked to many chronic health conditions. Learn about using herbs and spices to lower your intake!

The Centres for Disease Control and Prevention (CDC) reports that approximately 90% of people are consuming sodium at levels that are far too high, which increases the risk of serious health problems, including hypertension, cardiovascular disease and stroke.

Decreasing the amount of sodium that we eat can be difficult, as the average American diet contains a large amount of processed foods and foods prepared in restaurants, which usually contain high levels of sodium. Daily intake averages are about 2-3 times higher than recommended for most people.

A recent study offered some hope to those wishing to decrease their sodium intake. The study reveals that there are certain herbs and spices that may help to limit the amount of sodium that people consume when these herbs and spices are added to meals.

Dietary guidelines indicate that an adult should consume no more than 2,300 mg of sodium each day. Those suffering from certain chronic health conditions, such as diabetes, hypertension or other disease, should be limiting salt intake to less than 1,500 mg daily. Also, those older than 51 years, and those of African American descent should also be limiting their sodium intake.

Although limiting sodium intake is as simple as making dietary changes, and focusing on eating more fresh foods and homemade meals, this is still a challenge for most who attempt the task. Researchers have been looking for ways to make this task easier, so that people seeking to limit sodium intake have less of a challenge when they do try.According to Cheryl Anderson, Professor of Family Medicine at the University of California, San Diego, “At this time in our history, individuals have to take very dramatic and drastic action in order to accomplish [sodium] guidelines.”

This recent study looked at 55 participants. The participants were given a full diet of food and drinks containing low sodium. Over the course of 4 weeks, they were carefully monitored. At the beginning of the study, over 60% of the people had hypertension, nearly 20% had diabetes, and all were obese. Following the four-week period, each participant was able to reduce the amount of sodium they consumed from an average of 3,450 mg daily to only about 1,650 mg daily.

After the study ended, researchers attempted to extend the benefits provided by the study. During the study, the food was provided to each participant, but this was obviously impractical. The next step involved training them to prepare their own foods, foods which contained lower amounts of sodium. To do this, they introduced several herbs and spices to add flavour without adding sodium.

The participants were divided into two groups. One group was provided with guidelines for a reduced sodium diet. The other group participated in a behaviour modification program that lasted for 20 weeks, intended to train them to limit the amount of sodium consumed to 1,500 mg or less daily, through the use of herbs and spices.

Anderson describes the process: “We had a combo of individual sessions and group sessions and we allowed people to come in person or call in for their counselling sessions…[We had] cooking demonstrations; each of [the participants] would come in and demonstrate for their group what they had done at home with a recipe to take out the salt. They’d cook it up and everyone would try it. It was an opportunity for most people to try something new that another group participant was having success with.”

In addition to the cooking instruction, each participant was also given information about making healthier choices when dining out, and how to get back on track when they started to have trouble sticking to the guidelines.

When the first phase and second phase of the study were compared, it was noted that both groups of participants consumed more sodium than when they were provided with the actual foods. But, those who participated in the behavioural modification program increased less, and actually reduced their intake compared with the first group by nearly 1,000 mg daily.

Anderson explains that more than just the training is needed in order to make large scale changes in sodium consumption. “Spices and herbs are able to facilitate people getting to the recommendations, and there are other things happening in the intervention that are also important. But because sodium is so common in our food supply, we need to think about strategies that will complement each other to help people get to recommended levels.”

Ongoing education about low sodium foods, available to the general public, are necessary to help lower the average sodium intake. Easy access to whole grain foods, as well as fresh fruits and vegetables, will be important, as well.