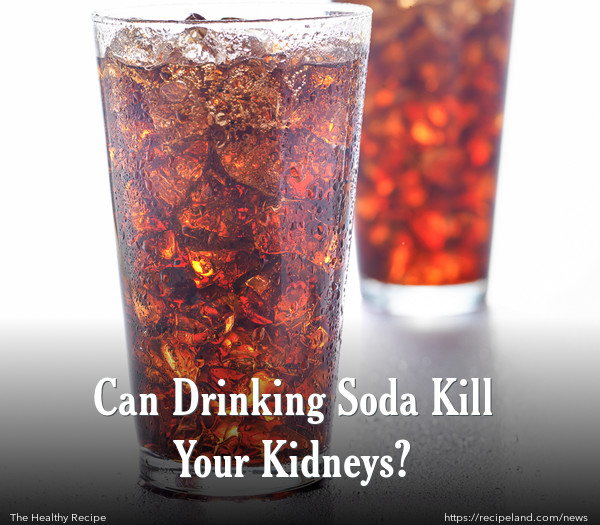 A recent study conducted at Osaka University in Japan revealed that drinking soda can affect your kidney function adversely and cause significant problems.

After studying about 8000 subjects ( who had no kidney symptoms at the beginning of the study) for 3 years, researchers determined that as little as two cans of soda each day can lead to a higher risk for developing end-stage kidney disease.

Greater than ten percent of the subjects showed the symptom of proteinuria, which is having a dangerously high level of protein in the urine and is a known to increase the likelihood of developing end stage kidney disease.

Until now, the research related to the effects of high fructose corn syrup on the kidneys was limited to animals. This study showed how the fructose affects the kidney function of humans, too.

Researcher Ryohei Yamamoto, Ph.D, states about kidney damage related to this type of sugar, “Oxidative stress and inflammation induced by fructose, which is more active sugar than glucose, may play an important role.”

Researchers determined that it doesn’t take much fructose, when consumed on a regular basis, to make the kidneys more susceptible to damage from proteins that typically are present to regulate sodium levels.

This increased sensitivity can not only potentially cause high blood pressure, or hypertension, but can ultimately lead to dramatic kidney problems, up to and including kidney failure.

Some assume that consuming diet soda instead of the sugary versions may prevent this problem, but diet soda consumption has been linked to the same kidney problems, as well as heart disease and even higher death rates.

This news comes as a shock and a disappointment to those who enjoy drinking soda on a regular basis, but researchers are urging people to consider healthier choices for their beverages to prevent long term problems.

Prevention is at a critical point on a global level!!

I see a kidney doctor because I have kidney problems plus for some reason my left kidney stop growing when I was little so I have 1 kidney and it only operates at 87 0/0
The one thing my doctor told to avoid is high fructose corn syrup because it will only cause more problems. He said if have to have a soda to drank 7up or a sprite for some reason these aren't as bad as the dark soda. So now I try to drank more water ,which I hate , and of I want a soda I will drank a sprite sense I can't find 7up in diet.
So listen people if the doctor says to lay off the sofa , listen

Kidney donor needed urgently at Apollo Hospital, we offer huge amount for one kidney only contact me via WhatsApp number: +918122208392 Email: apollohospitalkidneydep@gmail.com

We don't need more studies to realize that HFCS is pure poison. In the early 80's, not only did kidney disease increase by over 500%, but fatty liver hit all time highs. Why? The massive amount of HFCS in our food and sodas. The U.S., in it's infinite greed and stupidity, subsidized the sugar cane growers and diverted our natural cane sugar towards fuel, while giving us poisonous bacteria and fungus, aka HFCS, in our food supply. Contact your Representatives and fight this travesty. Put HFCS in the gas tanks and natural cane sugar back in our food supply.